Walk Through the Kitchen 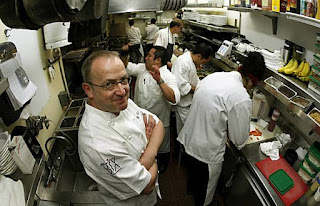 One of my favorite restaurants is a tiny Italian, family-run place called "Via Maestra 42" which is located in Santa Barbara, California. The restaurant has incredible food, there is a real Tuscan Italian family who run it, and it only has about 5 tables in the main room, with bar stools stacked along the sides of the wall. My favorite part about the restaurant though, is that in order to use the bathroom facilities, you have to walk through the kitchen. On my way to the "loo" this past week (actually I didn't really need to go, I just wanted to go into the kitchen) I walked past a sous-chef flipping a flaming ingredient in a hand-held frying pan. Another chef was pulling mozzarella cheese by hand. Another assistant was plating an entree. What I loved about the experience of walking through the kitchen was that I felt like I was really a part of the restaurant team. I sensed that I was a part of the action in the restaurant. I pretended to myself that I was even on the chef's staff. On a recent visit, I patted one of the chef's on the back on the way back to my table. "Nice work," I said, imagining that I was an extra on the television show, The Sopranos. Actually, I was just;
Walking Through The Kitchen
People have often asked me what some of the keys to growth in a church are. The answer to this question is, of course, multi-fold and varies from setting to setting. However, for Highlands Church, walking through the kitchen has also been an important dynamic for us. Every Sunday when the doors of our church close at the beginning of worship, there are invariably a large number of "late-comers" who arrive after we begin. Maybe these people don't realize how challenging it can be to find a parking place near the church, maybe they got stuck in traffic, or maybe one of their children threw a tantrum on the way to church. Because of our funky lay-out, and our difficulty in having an abundance of functional space, when people come late, we always route them through the kitchen in order to let them into worship. When people do so, they weave themselves past communion plates being prepared and refilled. They promenade past name badges of connections team members, and brooms for cleaning floors in between services. In order to enter our church on a Sunday morning, many people have to;
Walk Through The Kitchen
Ironically, our lack of a functional space dynamic has actually inadvertently contributed to a sense of intimacy, inclusion, and connection in our church community. The need to invite some people to walk through the kitchen automatically allows them "feel at home", and gives an impression that we are not perfect, and we do not hide our laundry in our church. One of our mottos for Highlands Church is, "no perfect people allowed." Our kitchen is where we demonstrate this reality in spades.
So, if you come late to Highlands on a Sunday morning, or even if you don't, and you are routed through our kitchen, we hope you feel that you too are part of the team, and that we are not perfect, and we don't pretend to be. Feel free to pat one of our volunteers on the back and say, "Good job, thanks for your help." Better yet, pick up a broom and begin to actually be a part of our team. We could really use your help! That's why we have people;
Walk Through The Kitchen
All For Now,
GB
Posted by Graham Baird at 9:00 AM No comments:

Back to the Theater 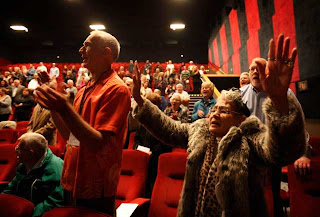 Here's a confession that won't impress you very much, but which has long been on my heart. I love Robert Schuller! I love Robert Schuller's ebullient sayings, "Inch for Inch It's a Cinch," "The Only Limits Are the One's God Sets," and "The Power of Possibility Thinking." I love the "little-church that could" that began in the city of Garden Grove in the 1950's in a drive in movie theater, amidst blossoming orange trees and the exponential urban sprawl of the post World War II era. I can still remember the cold December night when, as a Junior in High School, on a snowy white walk, I popped one of Schuller's cassette tapes from his famous, "Church Leadership Seminar" into my Sony walkman portable cassette head-set player (remember those?). On that tape I heard a new vision for church. I heard a new vision for life. Even though I was only 16, I was mesmerized by Schuller's optimism, and his simplicity, and his ever so slightly "psychological approach" that saw human potential as something more than a Calvinistic five step program. Long before Rick Warren, or Bill Hybels, or Andy Stanley or Joel Ostein, there was Robert Schuller - reaching unchurched people for Christ. "That's what I want to do with my life," I told myself, "that's sort of who I want to be."
So, it was with more than just a little excitement that I noticed in the newspaper this morning that after a long winter of dysfunction and collapse within the Schuller empire, that there was once again a flicker of hope. The Crystal Cathedral was alive once again - it was moving back to the movie theater. The theater this past Sunday was different from the original drive-in theater, and was instead, a typical indoor movie cinema theater. The preacher was different; this time it was Sheila Schuller, the eldest daughter of Robert. The calendar was not the 1950's but rather the early digits of the second decade of the next millennium. Gone were the packed out crowds, and the ranks of pipes from the organ, and the Grecian waterfalls which all splashed inside the Crystal Cathedral to create a melange of sound, light and pageantry. A solemn 100 congregants came to the theater this past weekend. Though I was not there to witness it, it would seem that there was a poetic symmetry about returning to the place where you began in life. In the new setting, there was no flash or pizzaz or hyperbole from younger years, but a humble gathering of people who wanted to worship God...."and a river runs through it."
Highlands Church, of course, began in a movie theater in Paso Robles, in 2006. Our first service in the theater did not have even 100 attendees, but only 40 came. Back in those days, my brother Jamie and I and a few hard bitten volunteers would wake up at 4:00 in the morning, and drive our trailer down to the theater, and unload our gear through a back door, side-stepping used syringes and empty beer bottles and dried up prophylactics and smelly throw up - and we would set up church. And people would come. All kinds of people who would never don the door of a church, or a chapel or a Crystal Cathedral. The experience of being in a movie theater to worship God was one of the highlights of my life.
My prayer for The Crystal Cathedral, in this next period, is that it would be able to change it's core identity, to alter it's seemingly irrevocable trajectory of loss and failure. Perhaps even it's name might be reconsidered. For example, it might go from the "Crystal Cathedral" to the "Velvet, Squeeky-Chair, Popcorn Smelling, Neon-Lit Place Of God", and therein rediscover it's purpose.
All For Now,
GB
Posted by Graham Baird at 8:31 AM No comments:

A River Of Hope 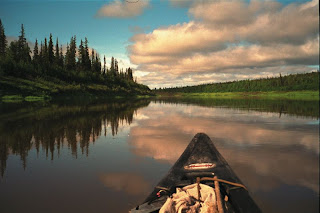 Yesterday, Highlands began it's four week Sunday journey through the book of Philippians, in a new series called H20 - Hope to Outsiders. In the process of doing study for this series, I have been reminded again of just how "hope-filled" the Christian faith really is. More specifically, I have remembered just how astoundingly hopeful the apostle Paul was, even in the face of the darkest times.
Paul, of course, wrote the book of Philippians from the Roman Praetorium (prison), probably about they year 62 AD (just four years from his own death by beheading at the hands of the Roman government). Contrary to the comments of a few Biblical commentators, the Praetorium was no easy place to be a guest - it was no easy place to be in prison. During his time in the Praetorium, Paul is literally shackled to a prison guard in constant servitude and enslavement. Whenever Paul sits down to eat, he eats with his guard. Whenever Paul goes to the bathroom, Paul goes with his guard. Whenever Paul prays, his guard goes down on bended knee with him. Paul loved a captive audience! And yet, even though Paul's circumstances are very challenging, he muses in the first chapter about the fact that imprisonment has actually been a good thing, "What has happened to me has actually served to advance the gospel." (Phil. 1:12).
Above and beyond the circumstances of Paul's life, it is the "theology of hope" in Paul's letters which is so powerful to me. In the book of Philippians, and throughout his epistles, Paul seems to be casting a vision of a forward movement in our lives from all things "dark" to all things "light". The Christ following journey, for Paul, is an irrevocable, unalterable trajectory from challenge into ease, from hardship into happiness, from difficulty into joy, from negative to positive. All Christ followers are on this journey. All Christ followers are on this "river of hope." The centerpiece of this theology is this verse in chapter one of Philippians; "Be confident of this, that he who began a good work in you will carry it on to completion until the day of Christ Jesus." (Phil. 1:6).
The hopeful power of this verse is manifold:
1. God isn't finished with us
2. God is continuing to move us in a direction of positive change
3. God does this through giving us good things
4. God will continue to do this all of our lives, and until the end of time
5. There is nothing (no sin, no evil power, no change in attitude) which can separate us from this continued on-pouring of good gifts
In my message yesterday, I compared this process of God pouring good things into our lives as a canoe trip my family took, when I was growing up, in Bozeman Montana, down the Missouri river. Prior to the trip, we all thought that the Missouri would be this incredibly fast river where we would be confronted with white water rapids. "Perhaps we would have to wear crash helmets because the waves and white water would be so fast," we mused. When we arrived on the Missouri, however, we found that the river was not a gushing maelstrom of torrential rapids, but a meandering, slowing rolling front of water. The river literally inched along at about 1 mph - no rapids, no whitewater, no excitement. It took us more than two weeks to float down that river. Sometimes when we would paddle, it would seem that our canoe actually went backwards. However, the end result was undeniable. Though we were moving slowly, we were still moving down the river.
God does the same thing in our own lives. Though life may throw many challenges our direction (job loss, marital struggle, family hardship, economic issues, health challenges), God still moves us down the river of our journey with God, away from darkness and towards the light. All Christ followers remain on the river, flowing towards better things, imbued with constant good gifts by Jesus Christ.
"Be confident of this, that he who began a good work in you will carry it on to completion until the day of Christ Jesus." (Phil. 1:6)
Ultimately, faith, then is about riding on a river of hope...
All For Now,
GB
Posted by Graham Baird at 8:27 AM No comments: