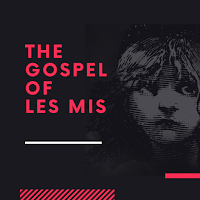 This week, at BurlPres, we are starting a new series on the great novel by Victor Hugo, published in 1862, Les Miserables.  The series is called, as seen above, "The Gospel of Les Mis".  As preparation for this series, which is mostly based on the book of Romans, I read this vaunted and always intimidating book.  I LOVED it!!

Frankly I have stayed away from it for years mostly because the name scared me - Miserable!  And I found the book to be anything but miserable.  It was very easy to read, and also very applicable to all of the concerns, issues, topics and theological insights for today (socio-economic division, immigration, God, sin, etc).  Here are some of my favorite quotes from the first part of the book (200 plus pages) will publish another section after this of quotes from the second part of the book.  Enjoy these quotes, even if you don't have time to read a 600 page novel!:-)

Fallen-ness
“For him [Jean Valjean] the external world had scarcely an existence.  It would be almost true to say that for Jean Valjean there was no sun, no beautiful summer days, no radiant sky, no fresh April dawn. Some dim window light was all that shone in his soul.  The beginning as well as the end of all his thoughts was hatred of human law, that hatred which, if it be not checked in its growth by some providential event, becomes, in a certain time, hatred of society, then hatred of the human race, and then hatred of creation, and reveals itself by a vague and incessant desire to injure some living being, it matters not who…from year to year this soul had withered more and more, slowly but fatally.” (p. 26-27)

Grace
“Ah, there you are!” said he, looking toward Jean Valjean.  “I am glad to see you.  But I gave you the candlesticks also, which are silver like the rest, and would bring two hundred francs.  Why did you not take them along with your plates” (p. 33)

Forgiveness
“Forget not, never forget that you have promised me to use this silver to become an honest man.” (p. 34)

“Jean Valjean, my brother, you belong no longer to evil, but to good.  It is your soul that I am buying for you.  I withdraw it from dark thoughts and from the spirit of perdition and I give it to God.” (p. 34)

Conviction
“That was his last effort; his knees suddenly bent under him, as if an invisible power overwhelmed him at a blow, with the weight of his bad conscience, he fell exhausted upon a great stone, his hands clenched in his hair, and his face on his knees, and exclaimed, ‘What a wretch am I.’  His heart swelled and he burst into tears.  It was the first time he had wept in fourteen years.” (p. 38)

Self-Righteousness
“This man [Javert] was a compound of two sentiments, very simple and very good in themselves, but he almost made them evil by his exaggeration of them; respect for authority and hatred of rebellion.” (p. 55)

“His conscience was bound up in his [Javert] utility, his religion in his duties, and he was a spy as others were priests.” (p. 55)

Lack of Mercy
“At those words: ‘The Eternal Father in person could do nothing for you,’ she [Fantine] understood that her sentence was fixed.  She sank down murmuring.  “Mercy!” Javert turned his back.”

Prayer
“Little by little, however, vague outlines began to take form and fix themselves in his meditation.”

God
“He perceived distinctly in the gloom an unknown man a stranger, whom fate had mistaken for him, and was pushing into the gulf in his place.” (p. 87)

Interior Laughter
“A sort of convulsion of the conscience that stirs up all that is dubious in the heart, which is composed of irony, of joy, and of despair, and which might be called a burst of interior laughter.” (p. 88)

Prayer/Christ Reference
After a lapse of a few moments, he could do no otherwise, he resumed this somber dialogue, in which it was himself who spoke and himself who listened saying what he wished to keep silent, listening to what he did not wish to hear, yielding to that mysterious power which said to him, “Think!” as it said two thousand years ago to another condemned: “March!”(p. 89)

God’s Love
“Jean Valjean would be admirable and pure in his sight.  That men saw his mask, but the bishop saw his face.” (p. 90)

How People Get Formed
“The galleys make the galley slave.” (p. 120)

Overwhelming Nature of Joy
“No human feeling can ever be so appalling as joy.” (p. 129)

Self-Righteousness/Salvation by Works
“Without suspecting it, Javert, in his fear-inspiring happiness was pitiable, like every ignorant man who wins a triumph.  Nothing could be more painful and terrible than this face, which revealed what we may call all the evil of good.” (p.13)

“Fantine was buried in the common grave of the cemetery, which is for everybody and for all, and in which the poor are lost.  Happily, God knows where to find the soul. Fantine was laid away in the darkness with bodies which had no name; she suffered the promiscuity of dust.  She was thrown into the public pit.  Her tomb was like her bed.” (p. 134)

Authoritarian Government Presence
“The presence of a vessel of war in port has about it a certain influence which attracts and engages the multitude. It is because it is something grand, and the multitude like what is imposing” (p. 144)

Infinity
She [Cossett] thought no more; she saw nothing more.  The immensity of night confronted this little creature.  On one side, the infinite shadow, on the other, an atom.” (p. 154)

Just and Example of Beautiful Poetry
The planet, in fact, was at that moment very near the horizon and was crossing a dense bed of mist which gave it a horrid redness. The mist, gloomily empurpled, magnified the star.  One would have called it a luminous wound.

Nature of Sin
Darkness makes the brain giddy.  Man needs light; whoever plunges into the opposite of day feels his heart chilled.  When the eye sees blackness, the mind sees trouble.  In an eclipse, in night, the sooty darkness, there is anxiety even in the strongest.  Nobody walks alone at night in the forest without trembling.

We Can Be Angels
At that moment she felt all at once that the weight of the bucket was gone.  A hand, which seemed enormous to her, had just caught the handle and was carrying the vessel [of water], and was carrying it easiy.  She raised her head.  A large dark form, straight and erect, was walking beside her in the gloom.” (p. 157)

Hope
“However, she felt in her bosom something that resembled hope and joy, and which rose toward heaven.” (p. 159)

Class Differences
“This gesture and the sight of the stranger’s costume and baggage which the Thenardiess passed in review at a glance made the amiable grimace disappear and the fierce air reappear.” (p. 161)

“It represented all human society; on the one side envy (poverty), on the other disdain (upper class).” (p. 164)

The Impact on Not Teaching Kids about God
“Never, as we have said, had she known (Cossett), what it is to pray, never had she set foot within a church. ‘How can I spare the time?’ said the Thenardiess (parents). (p. 163)

The Nature of Children
“As birds make a nest of anything, children make doll of no matter what.” (p. 166)

“Children at once accept joy and happiness with quick familiarity, being themselves naturally all happiness and joy.” (p. 182)

Mean People
“Coarse natures have this in common with artless natures, that they have no transitions” (p. 170)

Buying Someone’s Freedom
“The stranger [Jean Valjean] took from his side pocket an old black leather pocketbook, opened it, and drew forth three bank bills which he placed upon the table.” [buying Cossett for freedom] (p. 177)

Human Strength
The little girl (Cosette), with that tranquil confidence which belongs only to extreme strength or extreme weakness, had fallen asleep without knowing with whom she was, and continued to slumber without knowing where she was.” (p. 181)

The Power of Love (or lack of it)
“Jean Valjean had never loved anything.  For twenty five years he had been alone in the world.  He had never been a father, lover, husband, or friend.  At the galleys, he was cross, sullen, abstinent, ignorant, and intractable. The heart of the old convict was full of freshness.  His sister and her children had left in his memory only a vague and distant impression, which had finally almost entirely vanished. He had made every exertion to find them again, and, not succeeding, had forgotten them.  Human nature is thus constituted.  The other tender emotions of his youth, if any such he had, were lost in an abyss.” (p. 183)

God’s Providence
“The coming of this man (Jean Valjean) and his participation in the destiny of this child (Cosette) had been the advent of God.” (p. 185)

Good and Evil
Jean Valjean had this peculiarity, that he might be said to carry two knapsacks; in one had the thoughts of a saint, in the other the formidable talents of a convict.” (p. 195-196)

Angels
“It seemed as if these walls were built of the deaf stones spoken of in the Scriptures.  Suddenly, in the midst of this deep calm, as ravishing as the other was horrible.  It was a hymn which came form from the darkness, a bewildering mingling of prayer and harmony in the obscure and fearful silence of the night; voices of women, but voices with the pure accents of virgins, and artless accents of children; those voices which are not of earth, and which resemble those that the newborn still hear, and the dying hear already.  This song came from the glooming building which overlooked the garden. At the moment when the uproar of the demons receded, one would have said, it was a choir of angels approaching in darkness.” (p. 200)
Posted by Graham Baird at 12:56 PM No comments: