Too Big To Capture... 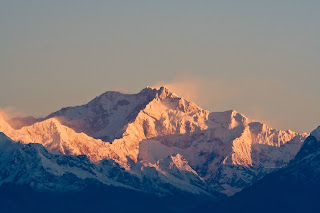 I have only been back from India for a couple of days now (awake this morning at 3:30AM, gulp), and there is one single image from Kalimpong which I cannot seem to erase from my memory.  It is the image of the third highest mountain in the world- Kanchenjunga (28,169 ft).  Just to give my fellow Coloradans some perspective, our highest mountains are half that size - 14ers (Pike's Peak - 14,115 ft)  Every morning in India I would wake up early to read my Bible, and there she was (I think mountains can still be referred to with a feminine pronoun, in our modern day of political correctness).  A mountain so big, she literally took my breath away.  I want to underline this.  Kanchenjunga was soo big I was breathless after casting my eyes upon her.  The mountain literally sucked the oxygen right out of my lungs.  Like the moment before you kiss a girl on prom night on the doorstep of her house, I was left breathless in her presence.  Like a powerful piece of music, or finishing an epic novel, or the arrival at an answer to a difficult math equation, I was breathless in Kanchenjunga's aura.   And so I tried to capture pictures of her.

I literally tried to take around 20 photographs of the mountain.  I attempted a photo from every angle.  From the airplane that landed in Bagdora I tried to take her picture.  To no avail.  The mountain looked like a tiny speck of a cloud.  No breathlessness.  I tried to capture the mountain from the balcony of the tiny rural, rough, hotel room where I was staying.  No effect.  I even drove up to the foot of Kanchenjunga and tried to take a picture as close away as a 49 miles from her base.  Nothing.  No power, no drama, no breathless feeling.  Again, the picture looked like a bad postcard at a freeway gas station.  Grant you, I was taking pictures of Kanchenjunga from my 5S I phone, but still, no powerful effect whatsoever.

What's the larger point I want to make here, for this week's blog post?

Some things are simply too big to capture!

It occurred to me that our God is also way too big to capture.  God, and God's glory, and God's son Jesus Christ, are WAY too big to capture in any which way.  Artists have tried for centuries to capture the magnitude and the multifacetedness of God in art.  Michaelangelo attempted to paint God touching the hand of Adam in his famous Sistine Chapel rendering, "The Creation of Adam."  Michalangelo's painting is great, but it does not capture God.  Leonardo Da Vinci's painting of, "The Last Supper," is an incredible rendering of the peace of the moment before the crucifixion of Christ, but it does not capture the scope of God.  Handel's "Messiah" is an entire symphony dedicated to the nature of God, but it does not capture all of God's facets.

And now I'm going to say something a little bit controversial.  Even the Bible does not capture the entire magnitude or scope or size of God.  The Bible is a 2,100 year epic depiction of God (Yahweh, Adonai, Messiah, Ruach, El-Shaddai, Son of God, Son of Man, Yeshua, Jesus), and yet it does not even begin to capture the entire scope and size of God.  The writers of the Bible, inspired by God Himself (Jeremiah, Isaiah, John Zebedee, John Mark, Matthew, Peter, Paul, Moses) must have stood back after writing their books and letters and said to themselves, "Gosh, that doesn't capture the entire scope or size or magnitude or beauty or power of God at all."

Some things are simply too big to capture!

All for Now,
GB 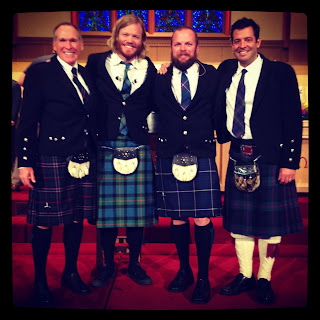 Two weeks ago, our church celebrated our second annual Kirkin of the Tartan.  For those of you who don't know, Kirkin of the Tartan was started by Peter Marshall in Washington, DC in the 1930's as a way of bringing a new worship concept to New York Avenue Presbyterian Church.  The church, as was illustrated in the book by Catherine Marshall, Peter's wife (A Man Called Peter - later made into a movie), was deeply entrenched in social networking structures of Washington, DC high society.  Peter hoped that bringing the bagpipes into church, along with a strong dose of the Scottish Reformation, was a way of helping to change up the rigidity of the system, and to bring some much needed change to a church that hadn't changed in a long time.  And so, on that first Kirkin of the Tartan (literally, "blessing of the families"), bagpipes were played in the sanctuary, kilts were worn, banners and flags were unfurled, and Scottish Reformed Theology (sovereignty of God, Grace, Salvation through faith in Christ alone) was preached from the front in a rich Scottish brogue.  The sanctuary was packed.  Change was beginning to happen in a place that nobody thought change was possible - New York Avenue Presbyterian Church!

I have organized 12 different Kirkin of the Tartan worship services in my ministry.  And
literally every time I have organized such a service, the attendance and the overall church growth has nearly doubled on that given Sunday.  Kirkin has served as a rich distinctive of Presbyterianism in a world and miasma of different religious traditions and the sometimes blandness of pure non-denominationalism.

*  We organized a Kirkin in Ann Arbor, Michigan, a culture that was very collegiate, and academically astute and constant - steeped in Midwestern values.  The sanctuary was filled.

*  We organized a Kirkin in San Antonio, Texas, where a rugged individualism of cowboy-ness and a rich Hispanic cultural heritage flows through the streets like the river at the very heart of town.  Kirkin in Texas very nearly helped to turn the tide of a struggling new church development.

*  We organized a Kirkin service in Red Bluff, California, a semi-rural agricultural and ranching community in Northern California.  People traveled from all of the neighboring cities to attend.  Our weekly attendance on that Sunday literally went from 130 to 250.

*  We organized a Kirkin service at the ultra edgy (at least for Presbyterians) new Church development that I founded in Paso Robles, California - Highlands Church.  The bagpipe band came in the back of the room, and then the worship band joined in with, "You are the Everlasting God."  Kirkin literally was the single most important catalyst early on for Highlands going from one weekend service to two.

*  As I mentioned, this is the second annual Kirkin at First Pres. Colorado Springs.  In the first year, Kirkin Sunday grew the church on that day from an average of 2,200 to 2,600.  This year, not only did the attendance go up, but the entire congregation have been abuzz ever since about the excitement it brought to the community.  One woman commented, "I never thought any worship service could be better than Christmas and Easter, but this year, Kirkin was."

Look, I can't explain it, but Kirkin is a catalyst for change in all kinds of congregations (ranching, rural, collegiate, society, urban, edgy contemporary).  Is it that Kirkin helps a Presbyterian church to tap into it's core identity as a cultural heritage?  Who knows.  Is it that Celtic stuff is just popular right now?  Maybe.  Is it that Kirkin actually reaches back into something primally Spiritual in our souls?  Might be.    Is it that the latest trend in church development and growth is a kind of high/low, new/old, shabby/sheek?  Possibly.  All I know is that wherever I have served, Kirkin has been more than a "blessing of the families" - it has been a blessing to the entire church and community.

Posted by Graham Baird at 7:44 AM No comments: