Was Jesus An Introvert? 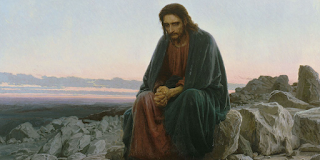 One of my friends from seminary days (Princeton Seminary), Adam McHugh, wrote a book several years ago called, Introverts in the Church: Finding Our Place in an Extroverted Culture.  One of Adam's main concepts in the book is that many, many church leaders through the years have been more on the introverted side.  Adam pits these personalities against the tendency for a lot of modern Christians (especially of the evangelical flavor), to be super extroverted (talking to people they don't know in a downtown space...etc, etc).  But in this week's blogpost, I want to ask an even deeper question:

First, to answer this question, it would be good to define what exactly is the difference between an introvert and an extrovert in a more classical sense.  Broadly speaking, introverts gather more personal energy and strength from pulling inwards, or being by themselves.  Conversely, extroverts tend to draw energy and strength from being around other people.  So, back to our question:

One of the most striking things about Jesus' ministry is how often the phrase, "And Jesus slipped into the crowd," occurs.  Sometimes it is put in terms of, "But he passed right through the crowd and went on his way," (Luke 4:30).  Some scholars think that Jesus had an ability to get out of trouble by finding easy exits from maddening crowds.  Surely, Jesus might have died at the hands of an angry mob, many years before his ultimate crucifixion, if he hadn't been good at "slipping away."  Another aspect of Jesus' basic physiognomy this points to is how, ordinary Jesus must have looked as a man.  Jesus didn't stand out in appearance.

More to the potential of Jesus being on the introverted side, Jesus spends A LOT of time by himself, in prayer throughout his ministry.  After Jesus spends a day and a night preaching in Capurnaum, and healing thousands of people, Jesus wakes up early the next morning, and spends several hours in prayer.  Of course, a purist would say that Jesus wasn't truly alone, since he was spending time in prayer with God.  But Jesus was definitely gaining some kind of strength in this occasion, and many others, from isolation.  In the garden, Jesus separates from the other disciples and prays by himself, while the rest of them sleep.

One of the signs of an introverted or an extroverted personality, in terms of public speaking, is that extroverts get energy from the crowds they are speaking to, and so, sometimes have a tendency to ramble on and on, long after their prepared remarks are finished.  Jesus, of course, never rambles on and on.  Sometimes, Jesus' sermons end so abruptly that it is jarring, as in the end of the sermon on the mount, when Jesus simply tells a story about two builders, and then walks off the stage (the hill, the mount).

In the end, it must probably be said that Jesus loved and loves spending time with other people, and yet, Jesus also enjoys spending time alone.  And, for all of us, this is a healthy balance to strike when at all possible.


Posted by Graham Baird at 9:21 AM No comments: