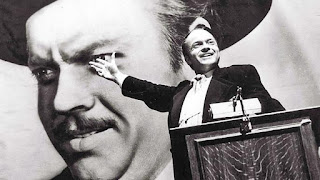 I am watching a Netflix documentary on the late, and some would say great, film maker named Orson Welles.  The truth be told, I have never really been an Orson Welles fan, and thought Citizen Kane (1941, pictured above), was only ok.  Keep in mind that I lived on the Central Coast for a while, near to where the real subject for that movie, William Randolph Hearst lived (Hearst Castle) and I have a slightly different interpretation on Hearst's character.  But I digress.

Orson did say something that I want to write about today.  He said that all films would be totally boring if it weren't for one important thing:

Actually the exact quote was; "The greatest things in movies are divine accidents."

Divine Accidents - says Welles, are things that happen in the directing process that are not what you planned, but rather are accidents that make a film much better than it would have been.  Throughout his career, Welles tried to cultivate these experiences.  When an actor or actress messed up a line, Welles would sometimes leave that "mess up" in the movie, because it made the scene seem more real.  When a bird would fly through a shot, or a sunset would be covered by a cloud, Welles would keep these in the movie as well.  These Divine Accidents made Welles' films seem more real, more palpable, more down to earth.

I have been thinking that ministry is really about Divine Accidents as well.  That is, the things that you plan in ministry don't always turn out the way you would like them to, but those mis-haps are actually better.  Here are some of my favorite examples:

1.  When my brother Jamie and I were starting a new church in Paso Robles, we were out playing the bagpipes one night, trying to take a photo for a promotional piece we are doing.  Across the street was a local TV station filming a news story for a low news day about a "fake bank robbery".  Before we knew it, the film crews that night were over filming my brother and I about the start of our new church, Highlands, and on the evening news that night, they led with that story from Paso Robles!  A divine accident.

2.  About a month ago, I bought a present for a person that I wanted to show some appreciation for.  This person had done a lot for the church, and I wanted to show them how much we were grateful to them.  Unfortunately the person that the present was meant for seemed to be on a long vacation, and hadn't picked up the gift.  Then, someone else happened by with the same name, took the gift and assumed it was for them.  They opened it, and were so grateful.  We didn't tell that person that the gift wasn't meant for them.  Maybe God meant the gift for the second person after all.  A divine accident.

3.  My wife was working a job recently that wasn't a fit for her, and she wasn't happy with.  One day, when doing a routine call to another agency on a professional matter, that other agency said, "Hey, is this Star?  How are you?  Are you looking for work, another job?"  Star said, "Actually I am, I am not that happy in this job."  So, Star applied with this other agency, and lo and behold she loves her new job.  A divine accident.

Whether or not you like Orson Welles' directing, perhaps you might agree with him that some of the best things in life are things that seem to happen by accident.  Or perhaps, with God, nothing is really an accident...

Posted by Graham Baird at 11:01 AM No comments: