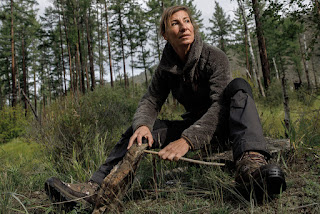 Over the Christmas break I visited my parents in Sacramento, where the whole family congregated for a couple of days.  While there, I became addicted to a reality show which is featured on the History Channel called - Alone.  I strongly recommend against watching it, unless you have two full days to carve out, because, if you are like me, you will also become addicted as soon as you see the first episode (the show is in its 5 season).

The basic premise of the show is that 10 "normal" individuals (mostly outdoors-types) are dropped into the wilderness by themselves with 10 items that they choose for their own survival.  The person who lasts longest in the wilderness wins.  The longest person to survive by themselves, I believe is around 164 days.  My favorite character on the show is Dr. Aline Abelian, who suffered from MS and who survived many, many days by herself in the wilderness of outer Mongolia.

The items that people choose to survive are what you might expect (hunting knives, hatchets, rain tarps, fire starting materials, and the like).  What is interesting is that for all of the contestants, the reasons that they don't make it (or "tap out") have less to do with basic survival (catching fish, hunting birds, eating wild berries) than it has to do with morale.  Basically, everyone who comes home early says the same thing, "I miss my family," "I can't take the alone-ness" anymore, "I'm sick of being by myself".  I guess the show is aptly named in that regard - Alone.

However, one survival item that I haven't seen any contestant ask for or utilize to date is perhaps the most helpful for all of our basic survival, that is - The Bible.  I firmly believe that if contestants on the show chose a Bible as one of their survival implements, and read it every morning, and then every evening, they might not experience the same level of "aloneness".

Some contestants got through the long periods of isolation by inventing pretend dolls, or companions, like the character Tom Hanks in the movie Survival.  Others tend to create relationships with themselves, by singing to themselves or acting.  Others make friends with the animals.  But none seem to rely on a higher power to feel that they are not alone.

There are actually many examples in the Bible of people who survive for long periods by themselves in the total wilderness.  The best example is Jesus, who, after he begins his ministry, spends 40 days and nights in the wilderness.  The only thing that prevents Jesus (Lord almighty) from losing his proverbial marbles is scripture that he has memorized ("Man cannot live on bread alone").  Other famous Biblical examples include Moses who spends long periods of time in the wilderness with his father-in-law, Jethro's, sheep.  We don't know if Moses has use of scripture, but he definitely has a close relationship with God, as in when he identifies God in the burning bush.  And then there is John on the island of Patmos.  The entire book of Revelation is a dream that John has, where God communicates with John the APOCALYPSES - Revelation.  Scripture helps people survive long periods of alone time.

I'm not sure I will ever become a contestant on the television show, Alone.  But I do know for sure, that scripture, and prayer, and talking to God, and God talking to me, and visions, and dreams are what get me through my alone times.  Perhaps they will work for you too!

GB
Posted by Graham Baird at 3:39 PM No comments: