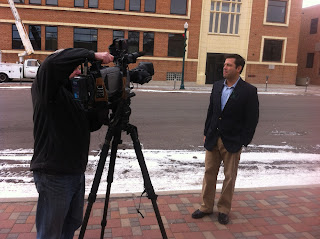 Last Friday I was asked to do a television interview for a local news station (ABC news, KRDO) regarding First Presbyterian Church's decision to ring the bells in our church bell tower 26 times, one for every child and teacher that was killed in the Newtown school disaster, one week before.  When the Connecticut governor requested that downtown churches peel their bells for this commemoration, First Pres was happy to oblige.  The interviewer asked me the usual questions that get asked at such moments, "How could God allow such things to happen?" "What is the local church's response?" "How are local groups guarding themselves from similar calamities?"  However, one question that the interviewer asked caught be by surprise, and has been ringing (so to speak) in my own ear and heart ever since, "Why aren't you ringing 27 bells?"

What the interviewer was asking is why isn't there a bell being rung for the death of the killer himself?  It's an intriguing question, and deeply theological question.  The immediate simple response is that we were only requested to ring 26 bells by the Connecticut government office.  However, the deeper question is, "When is it appropriate to grieve and remember the loss of someone who acted completely against the will of God?"  "When is a good time to forgive?"  "When is a good time to recognize that all people are made in the image of God, even fallen murders?"

One of the things that the Bible seems to be very clear about is that forgiveness is a mandate for the human soul, not simply a request.  When Jesus said we should forgive our brothers who have wronged us, "7 X 77" he meant it.  However, another strong Biblical notion is the concept of time and the power of the Holy Spirit to work within us to help us to accomplish things that we could not do on our own.

FORGIVENESS IS A PROCESS

Forgiveness should be enacted by primary parties, in the primary stages of any wrongdoing.  For example, it would be very wrong for me as a Caucasian Scottish American to offer forgiveness to those who committed atrocities in slavery in the 19th century in America.  That sort of forgiveness must be offered by those who were actually enslaved.  Equally, it is the families of those who lost children and loved ones in the Newtown tragedy which must be the primary agents of offering forgiveness in this crisis.

FORGIVENESS IS A PROCESS

One of the most poignant examples of the long process of forgiveness in the Bible involves the character of Joseph in the Old Testament, who is sold into slavery by his own brothers.  Joseph is sold into indentured servitude, wrongfully accused of lechery, sent to prison for many years, made to work in Pharaoh's government, and then, many years later, he is faced with the question of whether to forgive his brothers, who come to him for help.  The tables are turned!  Interestingly, even when the brothers approach the Pharaohnic throne, Joseph seems to take his time in forgiving them.  He sends for his youngest brother, Benjamin.  Joseph talks to his brothers at length, toys with them, interacts with them, all processes in the process of forgiveness.  It is only after Joseph, at long length, reveals himself to his brothers as their long estranged brother that reconciliation occurs.

How would this process even begin to work in the case of families who will never get loved ones back again, and a killer who is no longer alive?  God only knows!  Really, God ONLY KNOWS.  Which is why this interviewee did not glibly offer a simple solution to a very complex occurrence of wrongdoing, whilst ringing the bells on a cold Friday morning in December. 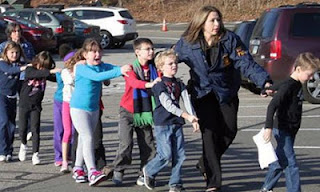 Last week, First Presbyterian of Colorado Springs went into a period of mourning and remembering the lives of those little children who died in the Connecticut mass shooting.  All week long, people we have been thanking me for my image of an "Everlasting Father" that met those children who died on that fateful day.  Several people have asked for a copy of that illustration and section from my message.  Here it is;

1.        Having An Eternal Father Means We Have An Eternal Comforter For All Of Eternity
I heard a true story recently about a little boy from Lowell Indiana,  who was in
his room praying one night.  This little boy had just learned the Lord’s Prayer, and he was trying to recite it by himself that night.  The boy asked to be left alone to pray, though his own Dad was at the door, listening to him pray.  The little boy got down on his knees before his bed, and he began his prayer this way, “Our Father, Who Art in Heaven, I Know You Know My Name…” (Our Father, Who Art In Heaven, I Know You Know My Name).
From the mouths of babes.  Our Father knows our name, and will know it for eternity.  And will be with us for eternity.  And will comfort us for eternity.  And I don’t know about you but as I have thought about the events of this past week, in my mind, the shooting in Connecticut, that is about the only thing that can bring comfort to my mind.
There is a picture of a line of children being escorted out of the elementary school in a line, which was on the cover of the Gazzette and the Post, and is now famous around the country.  It is a picture of the children all closing their eyes and shuffling out of the tragedy scene in the school of the blood and broken glass, they have closed their eyes, so that they cannot see what is there.  (And I don’t know about you, but I feel the same way, a person who just wants to close their eyes to this, and to shuffle out without looking).
But an image came to my mind this past couple of days.  The image is that of Jesus, the Everlasting Father, coming into that classroom at the very moment that the children died, and saying, "Daddy's Here!  OK, this is what I want you to do.  I want you to all close your eyes.  And then, I want you to put your hands on the shoulders of the person in front of you, and then I want you to start to just walk slowly.  Keep your eyes closed so that you don't see all of the bad stuff.  And I will lead you to heaven."  And then, Jesus Christ, leading out the little children, who were lost, goes at the front of the line.

Of course, none of us will really know exactly how God interfaced with those children on that day.  But our Bible tells us that we have an "Everlasting Father", an AD AV, who will be a comforter for all of us, on this side of the grave and on that, for all of eternity.

All For Now,
GB
Posted by Graham Baird at 8:06 AM No comments:

Them That Nobody Wants 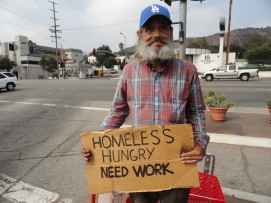 About seven years ago, I was attending a national pastor's conference somewhere (I literally cannot recall where at this moment, goes to show you how life all runs together sometimes..and a river runs through it...), and I heard Matt Barnette, senior pastor of The Dream Center near Echo Park, California speak.  Matt is the son of Tommy Barnette, the famed Pentacostal preacher and church builder.

Matt spoke about how he decided to begin a totally different ministry from his father.  He wanted to do something in the inner city, and really connect with gangs and drug addicts and homeless people, and all the tapestry of brokenness that one finds in urban settings.  Matt eventually bought an old hospital (by sheer miracle of God, raising something like $7 million needed to buy it - Matt had nothing when he started).  Matt recalls how one time a gang member that he was trying to help to become a Christ follower, pulled a gun on him, put it to Matt's temple and said, "get out of here, or I will shoot you, M#?#?# F?@?@?er."  Matt literally said that he thought he was going to be killed at that moment.

After about three years of this incredibly intense ministry, Matt said that he began to wonder whether God really was doing anything in his ministry, whether God really had a plan for his life, whether God was really still in this thing called ministry.  As Matt was walking across Echo Park one day, at that time a drug bedridden place of crime and fallenness, he literally heard this voice from God;

Matt later said that this was a turning point in his ministry.  What Matt struggled most with was the notion that he was "wasting" his life with people that were not worth "wasting" life on.  What Matt soon found is that God was sending him all kinds of people to help with his ministry.  Hollywood became engaged in Matt's ministry.  The actress Sharon Stone actually became a member and a large contributor to the church.  Other big names have gotten involved over the years.

Now, obviously this entire concept of having people that "everybody wants" come to your church is not exactly a highly spiritual motivation for starting a ministry.  It is probably not a good metric for a ministry to see it as a trade off of (1) taking care of homeless people on the one hand, (2) so movie stars will come to your church down the road.  However, Matt thought has got me thinking.

I have no distinct or solid answer for this.  But I am thinking deeply!  What are your thoughts?