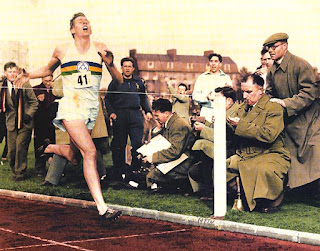 I'm still in Oxford, and while I had a break from class yesterday, I took a short walk from my college (St. Stephens).  I discovered an historic site - the actual track where Roger Bannister broke the four minute mile.  If you don't remember the story, the four minute mile was a marker that nobody was ever thought to be able to break.  And then, in 1954, Roger Bannister, a lanky runner from England, set out to break it, and then did - he ran the mile in under four minutes.  It was a major achievement, akin to Hillary climbing Everest, or a man landing on the moon.

It occurred to me that C.S. Lewis was a sort of "Four Minute Mile Breaker" in his own way.  Lewis was one of the first Oxford professors of his time to become a Christian, when Christianity was considered "not the thing to do."  More to the point, Lewis carried Christianity off intellectually, in a place where (Oxford), intellectualism is the main mode of experience.  Specifically Lewis offered new inroads to non-Christ followers about how to become a Christian.  There were three main areas or avenues that Lewis took as an evangelist (apologist) of sorts - Lewis' Four Minute Miles:

His first main idea was that all people have a profound and fundamental desire to experience more life, love, enjoyment than this life offers.  "All people have a desire for something more.  Therefore, we reach beyond the shadowlands of this life..." (paraphrased).  This desire is proof that we are, "made for some place other than this, made for heaven."

Second, that all people have fundamental laws or morals.  All cultures have a fundamentally similar understanding of justice, mercy, love, life, goodness, ethics, morals.  These morals are evidence, Lewis said, of God in us, "imago dei".

Finally, Lewis wanted to take on opposing ideas and thinking patterns of his time which were antithetical to Christianity.  The most famous example (and easiest to explain) might be the illustration from The Silver Chair.  "There is no such thing as Aslan, or the sun, or the over world, it's a nice idea, but it's not real, all that there is is what you see, here in the underworld," said the White Witch.  "Well, there may not be all of those things," Puddleglum said, "but I want there to be, and I would rather believe that there is." (paraphrased).  Therefore, choice was a deep part of Lewis' formula.

Now, class begins,
Perhaps I am working on breaking my own "Four Minute Mile"...
All For Now,

GB
Posted by Graham Baird at 1:21 AM No comments:

New Years in Cairo - A Full Moon in Oxford 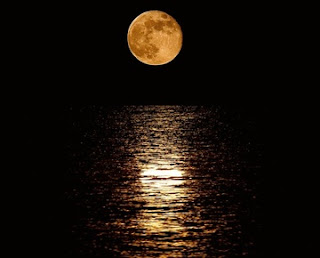 I have been in Oxford for a day now, and I hope you will indulge me if I write a bit about the romance of this wonderful place.

There are two memories which will remain with me, I think, until I am called home.  The first is the joy of being in Cairo, Egypt on New Years eve and overlooking the Nile river, in all of it's luminescent glory, at midnight as fire works went off on the opposite side of the city.  I can still remember the reflection of the fireworks on the water, from my hotel room balcony, and marveling at how different this culture of Egypt was from my own.  The second great memory will be seeing a full moon perched over the ancient cathedral ramparts of Oxford, and again, watching a hovering orb reflected in the water of the Thames river.

On both occasions what I think I love the most was the feeling of being in a place that was totally other (Egypt and England), and yet feeling like this place was very much a part of me.  I experienced the joy of having something near me which was so much larger and bigger than me (the Nile, the Thames), and yet somehow absorbing it's beauty at the same time.

I think, in a way, that is what is so exciting about Christianity.  It is the dual experience of knowing a God who is vast in size and scope, and yet feeling a personal connection to that God in Jesus Christ.  It is the polarity of viscerally knowing the "otherness" of God while at the same time knowing the similarity of this God with my basic being (I, like you, am made in the image of God- Imago Dei).

This polarity between connection and distance, vastness and intimacy, beauty and sovereignty is perhaps what David was trying to express in Psalm 42; "As a deer longs for flowing streams (thirst is not a pleasant feeling until it is quenched), so my soul longs for you, O God.  My soul thirsts for God, for the living God.  When shall I come and behold the face of God?  My tears have been my food day and night, while people say to me continually, "Where is your God?"

To stand between the moon and a river in Oxford is a kind of in-between place.  To experience the fireworks of Cairo on New Years overlooking the Nile is to be suspended in between two realities.  That suspension is what it is to be human.  That nearness and distance to God is what it is to be a Christ follower.

Or at least, that is my thought on this first day of my C.S. Lewis class.  But I am sure Lewis would agree.  "We live in the Shadowlands, beyond the bend in a road, around the curve of a hill..." (or something like that.

Posted by Graham Baird at 12:59 AM No comments: 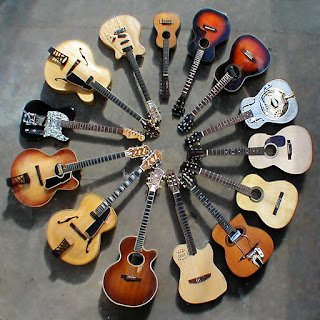 *  James Baird (my grandpa), an ordained Presbyterian pastor, was offered a contract with the LA Metropolitan Opera Company to sing Baritone - a great pastor.

*  Bono; OK, I know this is a stretch, but Bono actually probably speaks to more of an audience (or congregation) than any mega church pastor in the world.  Bono regularly gives "sermon-ettes"in the middle of his concerts.

*  King David; the Bible tell us was a harp player, and soothed king Saul with a concert every single night to "calm Saul's nerves".  Though not a pastor per say, David's songs (Psalms) were the best sermons ever preached.

*  Jack Hayford; one of the great Pentacostal preachers today, plays the piano in church on a regular basis.

*  Bill Hybels; most people don't realize that Bill Hybels, the Lead Pastor of Willow Creek Community Church, actually was one of the original worship leaders of the church, playing mostly country western music.

And the list could go on and on.  What is the connection between music and ministry?  Well first, good preaching is basically "singing."  Far more important than the actual words that a preacher says, are the ways that a preacher intones those words.  Martin Luther King Jr. was famous for his "singing style" of preaching (customary in the African American preaching context).  Just imagine Martin Luther King saying the "I have a Dream" speech, but instead of beginning the talk in the one-toned tenor range that he began at, (I Have a Dream), imagine him starting the speech in a base clef, or in the dreary tones of a financial statement being read.  It wouldn't have had the same effect.

More importantly, musicians are also very "in tune" with the world around them.  Musicians have a hard time talking about things that don't seem relevant to their listeners,or helpful, or harmonic.  Good public speaking is about knowing your audience, but also about being in tune with how they feel, what is going on in their lives, what are their "hopes and griefs that they bear," (there I go quoting a song...What a Friend We Have in Jesus).

Most of all, musicians make great pastors because I believe that God is basically a harmonic being.  C.S. Lewis imagined the beginning of the world to have been like the convergence of a great symphony orchestra.  The sounds were all over the place, but then they were made one and harmonic by the great hand of God.  Jesus said, "Blessed are the Peacemakers (The SHALOM makers)," - but he could have said, "Blessed are those who bring harmony to their surroundings."

So, what to say to those reading this blogpost who are decidedly unmusical?  Can unmusical people be great pastors too?  Of course.  For example, one gets the feeling that the apostle Paul wasn't exactly musical (though he did sing songs to pass the time and boost his spirits while he was imprisoned in Philippi).  But lets just say that unmusical people tend to have different ministries than those who are musical.  They tend to bring cacophony (the opposite of harmony).  But of course, cacophony is a kind of music as well...

All For Now,
GB
Posted by Graham Baird at 9:16 AM No comments: