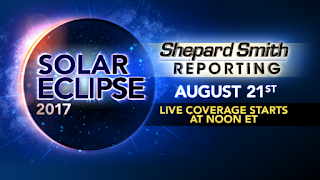 Like many of the rest of you, I have been captivated for the last couple of hours at the partial solar eclipse.  From our house in Oxnard, California, which is usually overcast with coastal fog in the morning, there has been a rare break in the clouds so we have been able to see the intergalactic wonder with all of its "finger-nailed" splendor.   What I have been equally interested in is the split/screen television coverage that has taken place simultaneous to the 99 year annual event.  On all of news stations covering the event are other news stories that are taking place that seem of equal, if not greater importance (an Afghanistan troop buildup, a US Navy ship that has broadsided an oil tanker, a terrorist in Barcelona has been shot, an American Presidency that seems to be in peril).  And so, the world turns...

The message seems to be that as the skies have a miraculous event taking place, as a once in a life time event occurs, so does life move on.

Of course it wouldn't be the first time that people on earth are more caught up in the regular day to day events, than the spectacles that have lit up the skies.

*  One wonders if in 1,500 BC, in the land of Egypt, as frogs were leaping out of people's bathrooms, and locusts covered the skies, and blood ran red in the Nile River, if there weren't people at beauty parlors getting their hair done for an evening dinner party that would take place.  People had things to do, and places to be.

*  In 3AD when an odd, and out of the ordinary "star" appeared on the horizon in the small town of Bethlehem, in the land of Judah, historians tell us that the emperor of Rome, Octavian (Augustus), was vexed by Germanic troops (terrorists) that were coalescing on the northern edge of the empire, in the Teutoburg Forest.  Augustus was, at that moment, of Jesus' birth and the star's shining, planning for a Roman troop buildup in an unruly part of the world

As the World Turns...

*  In 79AD (though Tacitus records the event as having happened in 63AD) when people in the small town of Pompeii, at the base of Mount Vesuvius, were finishing their morning breakfasts, plooms of smoke and ash began to emerge from the huge summit that dwarfed the city, and later covered it with molten lava.  People had things to do, places to be.

As the World Turns...

No matter what the cosmic events of our lives, the main theme from those who live on the planet earth has always seemed to be that life moves on, events continue, time moves forward, the activities of our lives commence.  But will they?  But do they really?

I do not think, as some of my religious friends do, that the full solar eclipse is an omen of the end of all things.  Eclipses have come and eclipses have gone.  But who knows?

But for now, the world continues to turn!

The Seeds of White Supremacy 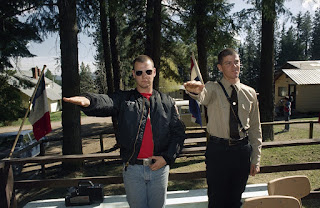 Like many of you, my family and I have been watching our television screens about the events in Charlottesville, Virginia with a mixture of grief, anger and outrage.  It simply boggles the imagination how anybody could espouse the kind of hatred and evil that the White Supremacists who are marching there, and marauding there, have within them.  Most of the television news coverage of this event has boiled down to political analysis.  This problem in our country does have political dimensions, but the roots of it, the seeds of White Supremacy, are much more nuanced.  What has been missing from this national conversation so far, has been the recognition that this kind of evil (White Supremacy) exists all around us, and how we as a society and a country must address it and stamp it out whenever it emerges.  To this end, I wanted to share in my blogpost today about one young man who got caught-up in the White Supremacy movement in one of the churches that I grew up in.

In the late 1970's my father was a pastor of a wonderful church in Boise, Idaho.  The church was an incredible family of faith and body of Christ, and one of the most Holy Spirit-filled church experiences of my life.  To this day, I still look fondly back on my years growing up in Boise and attending that church.  Church Potlucks, Bible Studies, Family Camps and All Church Barbecues were the mainstays of that church.

Like most churches, the church had some of the most amazing and Godly people in its membership.  Also, like most churches, it also had one or two of the attendees occasionally had some emotional challenges, and mental problems.  One of the young men, who had emotional challenges, and mental problems, and who sometimes attended that church, was a teenager named David Charles Tate.  "David only occasionally attended", my Dad told me once, and "often when he did, would sit at the back, by himself".  He was a loner.

Around ten years later, (and it should be said, nobody knows the exact chain of events) David moved to Northern Idaho, near Hayden Lake, and got caught up in a very sinister group of people known as "The Order" [The picture above is of young men doing a Nazi salute in Hayden Lake, Idaho in 1989].  The Order was a group of "Christian Identity" followers who were led by a very nefarious man by the name of Richard Butler.  The Order's so-called theological underpinnings stemmed from a very twisted, evil, and wrong-headed view that, "white Americans and Canadians are the real tribes of Israel", and that, "Jews are descended from an Asiatic tribe of people known as the Khazars". (from researcher Nicole Nichols, an expert on far right racist groups in America - 2003).  David, it is assumed, found a personal-identity in a group of equally emotionally deviant and mentally challenged people.  Soon, David found himself the subject of a national manhunt and on April 15, 1985, after he and a handful of members of his cult killed a fellow member of "The Order".  David  found himself in a stand-off with two Missouri State Troopers, who were conducting a random vehicle and license plate check.  David killed one of the troopers and critically wounded the other.  The state trooper, Jimmie Linnegar, only 31 at the time, was one of those killed by David.  Tate was later convicted of assault and murder and sentenced to life without parole.  One silver lining to this very sad story,  is that, "Federal authorities used the Tate incident, and Tate's testimony, to arrest many other members of the White Supremacist cult in Hayden Lake."

News reports of the profile of the young man who is being charged with the crimes in Charlottesville, Virginia, James Fields, sound similar to the accounts I heard of David Tate.  He was confused, misdirected, had mental health issues, deep-seeded misplaced hatred, and perhaps most of all, found a group of equally broken and misguided people, to affiliate who were members of a religious cult.  A medical health professional recently told me that many of the patients that he sees, have personal associations with hate groups.  This is not to say that all people who face mental health challenges are racist, but that psychological stability is one important component to understanding this form of evil.

I am sure that as the weeks and months emerge, more information will come out about this very sad incident in Charlottesville.  Suffice it to say, though, on this Monday morning, after the weekend of violence in Virginia, that White Supremacy exists, it is very sinister, very dangerous and very evil.  And right-minded people in an advanced society like ours must stand against it at all costs!


Posted by Graham Baird at 9:16 AM No comments:

When Everything Seems To Totter 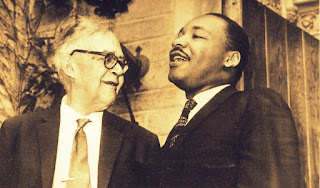 I am reading a lot of Karl Barth for my doctoral dissertation.  Wait!  Before you close the link to this blogpost, let me try to convince you that Karl Barth may not be the preaching dogmatist that you have considered him to be (if you consider him at all:-).  I grew up with a father/pastor who clung to the theological mainstays of Barth's theology like a dryer sheet clings to laundry.  "Karl Barth saved Christianity against the Nazis", I grew up to think.  And then, when I went to seminary, Barth was taught by so many theological hardliners in classes with titles like, "Church Dogmatics", and "Systematic Semiotics" that it nearly drove me away from his writings entirely.  But I have just rediscovered what a poetic person that he was, and also, frankly, a non-systematic thinker in many ways.  Here are some of his great poetical phrases;

"At some point, the fellowship of those who hear Scripture's voice, again finds itself on solid ground, WHEN EVERYTHING SEEMS TO TOTTER." (Church Dogmatics, IV, part 2, p. 673).

Is that not a good definition of our world today?  A place where everything around us is seeming to totter?

"The Bible will become more and more mysterious to real exegetes.  They will see all the depths and distances.  They will constantly run up against the mystery before which THEOLOGY IS LIKE TRYING TO DRAIN THE OCEAN WITH A SPOON." (Homiletics, p. 128)

I love this!  The Bible is a mystery, not meant to be understood fully or dissected entirely.  And theology, I have always thought, had the tendency to systematize ("mathematicalize") the most vast concepts in the universe.  The God's truth is an ocean, deep, mysterious, complex and vast.

One of my favorite pictures of Barth is the one above with the late great Martin Luther King Jr.  MLK actually criticized Barth, in his own doctoral studies, about Barth's view that, "God is the unknowable and indescribably God."  But MLK loved the idea that, "man is not sufficient unto himself for life."  The above picture was taken in 1962 at Princeton University just six years before MLK's assassination.

This past week I emailed my friend, Will Willimon, writer of one of the best books on Barth, Conversations With Barth on Preaching, to ask if he thought that Barth was a kind of Samuel Johnson (Dr. Johnson) of his era.  Both thinkers were so widely read, ubiquitous in their thinking.  Willimon had never heard this formulation about Barth, but agreed that, "it fits".

So, the next time you hear Barth's name spoken from a church pulpit, think of him less as an old religious stalwart, and more of a poet, and imaginative genius. He was less the man that modern theologians have wanted to create, and more of the man that he really was.

GB
Posted by Graham Baird at 11:17 AM No comments: