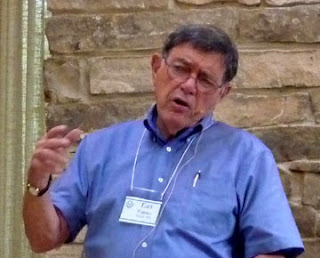 If you are a fan of rock and roll music, then you know that The Edge (ne David Powell) is the name of the famed lead guitar player for the rock band, U2.  However as I have thought about the secret to great teaching, whether in a classroom or a boardroom or a pulpit, over the years, The Edge is what I have determined is also the key to great teaching.  All great teachers have - The Edge.

What do I mean by The Edge?

All great teachers have a compelling force that comes from the inside that sets them a part from just someone who is giving a discussion, or sharing a thought, or communicating a principle.  The Edge can be a nondescript energy.  This energy can sometimes be mistaken for annoyance or being perturbed.  The Edge often comes from the fact that the teacher has a lot of complex information, or a difficult concept, that they want to communicate in a way that is life changing.  The Edge is conveyed to a class or a room of people in the notion that the teacher will not have accomplished his/her main purpose for the lesson, unless everyone in the room gets it.

Who are some teachers that I have known over the years that have The Edge?

Mr Erickson (sixth grade teacher, Hawthorne Elementary School, Boise, Idaho)
As we came into the room that bright day in early September, Mr. Erickson, our new teacher for the year had us line up against the wall rather than sit in our assigned desks.  Spitting words at us like a Gatling Gun, Mr. Erickson said, "This is not going to be a normal class.  This is not going to be an easy class.  You are going to be challenged this year in ways that you have never been challenged before.  But after it, if you listen and you learn, you will find that you are a different person."  One of my friends raised their hand in an attempt to clarify what Mr. Erickson meant by 'challenge', but then thought better of it and hid his hand behind his back.  I will never forget my year with Mr. Erickson.  That year we learned about Hydogren Chloride, the 'jell mass' of Shampoos, and many other things.  Mr. Erickson had - The Edge.

Professor Adrienne Christiansen, Macalester College, class on The Rhetorical Tradition
The class that boring morning was focussed on a discussion of Platonic f'orms' and their differences with Aristotelian 'forms'.  A student raised his hand, "Dr. Christiansen, it seems to me that Plato and Aristotle are very similar.  Both Greek philosophers, both concerned with classification."  Professor Christiansen answered, "Actually nothing could be further from the truth.  Plato talked about a higher form, Aristotle was just concerned with writing every single classification down."  I never received higher than a C grade on any paper or exam that I turned into Professor Christiansen.  She wasn't always nice to me.  But she had an indispensable, undeniable force that compelled her teaching from within.  She had - The Edge.

Dr. Charles Ryerson, (Princeton Seminary, class on Hinduism and the Christian Context
As we sat in our tables in Templeton Hall, Ryerson began, "I don't know what any of you learned in college.  I mean, honestly, some of you I wonder how you even got accepted to this seminary.  Christianity is not some set of rules or Bible texts or principles.  It is who you are, deep within you, a context that was deeply embedded in your whole world outlook."  I would later travel the Indian subcontinent on a research scholarship given by and mentored by Dr. Ryerson.  Before I sat under the tutelage of Ryerson, I never knew much, or to be honest, cared much about India.  Now it is one of my favorite countries in the world.  Mr. Ryerson had - The Edge.

Rev. Earl Palmer (West Coast Pastor's Conference, Mt. Hermon, California)
From the front, "I am so delighted to be looking at St. Paul's Epistle to the Philippian Church over the next few days together.  We have lots of material to cover, so it is best, perhaps, if we just dive into it.  On the Monday after Palm Sunday, Jerusalem was abuzz with an uncomfortable disease."  Rev. Palmer (pictured above) is and was one of the greatest teacher/preachers of his generation.  I did an entire paper on the writings and teachings of Palmer for my Doctorate at Fuller.  I literally picked a part, piece for piece, countless sermons that Palmer gave.  In short, he is inimicable (un-copyable).  But what I discovered is that what made Palmer's preaching/teaching great was not so much his words, but his force.  Palmer had - The Edge.

All great teachers must have The Edge

One last thing.  The Edge cannot be manufactured, or affected or pretended or replicated.  You either have a deep desire to communicate a singular truth or you do not.  Teachers who try to pretend like they have it often come across as being simply "mean" or "strident".  However, if you ever have the opportunity to be taught by someone who has this miraculous gift, you can be changed for the better for a lifetime.


Posted by Graham Baird at 9:19 AM No comments:

A Dream That Was Bigger Than He Was 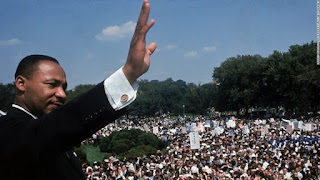 What is the biggest dream that you have for your life?  Maybe your dream is to be famous (a rock star, an author, or an actor).  Perhaps your dream is to live a happy life (your kids are fulfilled and healthy).  Some others may have a dream to make enough money to retire early.

I have moved through various dreams for my life as I have gotten older.  When I was in high school, my dream was to be in politics, maybe a senator or even higher.  Then, I got to college, and my dream was that I might go to broadway and be a singer in a show, like Les Miserables, or Phantom of the Opera.  After college, my dream was to go into International Relations and work in a foreign embassy.  Then there were the dreams to build a "mega church" like Robert Schuller or Rick Warren. Now, my dream is mostly to build a healthy church that HELPS people, and to raise a family that has internal strength and fortitude.  But to be honest, most of the dreams of my life have been about ME.

Today is the 50th anniversary of the death of a man whose dream it was to live in a fully racially integrated society.  A place where, "one day there in Alabama, little black boys and black girls will be able to join hands with little white boys and white girls as sisters and brothers."  This was the dream of one African American pastor named, of course, Martin Luther King Jr., who was shot on the porch of his hotel room in Memphis, Tennessee, on April 4, 1968.

What is remarkable about Dr. King's dream, in hindsight, is how huge and how bold and how grandiose and how large it actually was.  We take for granted today that it is possible to have a president of the United States who is an African American, or to be able to go to any college you want to as long as your grades are good enough, and you have the financial means.  But back in Dr. King's day, that wasn't the case.  South of the Mason Dixon Line, as they say, separate bathrooms were commonplace, separate restaurants, separate stores, separate neighborhoods.  America was deeply divided.

To compare the radical audacity of racial integration in the South (and North) to Dr. King's dream in 1968 would be to compare it to some of the current massive calamities that our world faces.  A modern day version of Dr. King's dream might be one of the following:

"I have a dream...that one day every child on the face of the earth will not go to bed hungry at night."

"I have a dream...that one day malaria and other mosquito born illnesses, which kill millions of people around the world each year, will be eradicated."

"I have a dream...that depression and other psychological illnesses that people face, will be a thing of the past."

"I have a dream...that the United States will never again have a mass shooting ever again."

"I have a dream...that there will never again be a war that involves religious differences between people."

"I have a dream...that there will never again be a war!"

You fill in the blank....how big of a dream can you come up with?

What is the seedbed of great dreams?  Courage, obviously.  Altruism.  Audacious, irrational optimism and tenacity.  A crazy idea that is so big that you are willing to lay down your life for it.

And perhaps most of all, the dream that you might have, will be larger than your own life.  That is, if you were to die, in the middle of the completion of that dream, as Dr. King did on that porch in Memphis, Tennessee, that that dream would go on, and carry forward and progress a little more day by day.  And of course there is work to do.  But the dream still exists.  As Dr. King put it, until the day when we are...

Posted by Graham Baird at 3:36 PM No comments: