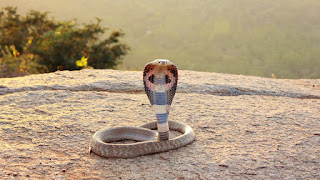 Not long ago, I learned about a social phenomenon that occurred in the country of India during British colonial rule there (1858-1947).  During some juncture during British rule in the capitol city of Delhi, government officials became concerned about the number of venomous cobras that were "on the loose".  As a remedy, the British government offered to pay a bounty on every dead cobra that was killed.  Because the general population of the city was very poor, and had no employment, many of the more enterprising ones began to breed cobras, and then bring them in for their reward.  When the British found out about the scheme, they quickly disbanded the program.  Finding no other use for the cobras, the locals simply released the venomous snakes into the city streets, thereby multiplying the number of dangerous snakes by the thousands.

This social tendency to make a solution to a problem worse than the original problem itself has become known as the - "Cobra Effect".

There are many, many other examples of this in history.  In Hanoi, Vietnam, there was a similar incident known as the "Rat Effect".  Closer to home, some would argue that Prohibition Laws in the United States had a similar effect.  When the US government outlawed the production, importation, transportation and sale of alcoholic beverages from 1920-1933, most social scientists tell us that drinking patterns of most Americans, and the abuse of over drinking, actually went up.

This phenomenon of the Cobra Effect has gotten me to thinking about cross-applications to religious life and theology.  Is it possible that churches that focus mostly on the sins of their congregants actually have more examples of sinful behavior in their congregation than churches that do not?  Is it possible that the the obsession over certain types of sin, over other kinds of sin, actually creates a Cobra Effect within our churches?

When I was in seminary, there was a group of guys who got together every Monday night and had a prayer group with one another.  I was not a part of this prayer group, so my knowledge of it is only second hand.  Rumor had it, though, that the most common prayer that they prayed with one another about was, "prayers for lust".  That is, I suppose, that members of the group felt a need to pray about the sin of lusting over other people.  Every Monday, the same prayer came up, "prayers for lust, prayers for lust, prayers for lust."  While I do not know (or care), whether the lusts of these young men were ever fruited (so to speak), the constant focus on this particular sin seemed to have the tendency to drive it further into their hearts, minds and souls.

I recently heard a Ted Talk about a person who was studying this phenomenon as it related to endangered trees in a particular forest in the United States.  Because these trees were endangered, there were signs along the paths of the forest that said something like, "Please don't pick up old pieces of wood that have fallen to the ground.  Every year, people steal 1 million pounds of wood from this forest."  The effect of putting up these signs was that the amount of stolen wood actually went way up.  The internal message that was being sent was, "Wow, I had never thought of stealing wood before, but I better pick some up, and take some home, it must be worth a lot....and if others are doing it, why don't I?"

In a way, one could think about the very first sin in history, the proverbial snake in the garden of Eden, and God's command not to eat from the tree of good and evil, as the first example of the Cobra Effect.  Had God not told Adam and Eve not to eat from the tree, would they have ever had the notion in the first place?  Wasn't the real lure of the forbidden tree that it was something that they shouldn't be doing?  Or perhaps is it, that the true Fall of humanity has less to do with the eating of the fruit, than it does with the desire, deep inside all of us, to do the things we are not supposed to do?  In this way, the Fall of humanity actually precedes the Fall of humanity?

Who knows?  All I am sure of is that the next time I stay the night in the city of Delhi, I am going to check my bed two or three times before crawling into my sheets, and experience first hand...