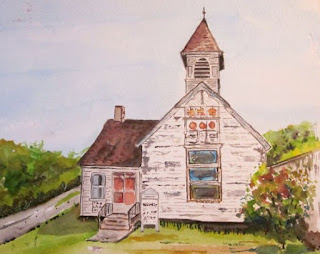 Recently, our family has been investigating the possibility of getting a pet.  Because we are renting in Southern California, a "smallish" indoor dog seems the best option (Can you say - "Labradoodle?")  Our quest for a canine companion, however, has caused me to cast my memory back to some of our best pets we had growing-up.  We had a West Highland Terrier named "Macky" that had been sort of neglected by its previous owners.  Mack was a little bit "nippy" when we first got him, but after a couple of years of nurture, he became more docile, and good natured.  We had an African Grey Parrot named "Kiki" that had been tormented by its previous masters by hitting it with a broom handle.   Whenever we would broom the kitchen, the bird would go crazy for fear that it would be hit again.  So, we broomed less, but we nurtured more.  The bird calmed down after time.  In both cases, some of our best pets were animals that others had discarded, or mistreated for whatever reason, but made huge transformations simply by being:

About ten years ago, I was asked to consult on a church near me that had declining growth in attendance over the past several years.  There was a lack-luster attitude, in general, about almost everything in the church.  In front of the sign to the entrance of the church were weeds that were growing up above the letters.  The church office was piled high with garbage from many years of disregard.  The church yard was unkempt and sprawling with weeds.  The large cross out in front of the church was weathered and paint was chipping off of it.  In short, the church just did not look cared for.

Not just the building, but the congregation itself seemed un-cared for.  Many of the shut-in members had not been called on in years.  When people got sick and went to the hospital, nobody followed-up or prayed for them.  Many of the staff at the church did not even have their own work-space or computer terminals to do their work in.  The congregation were not cared for.

When, I was asked to give my "expert opinion" on what steps this church could take to help it to grow and come back to life, I felt torn.  Because I was hired as the consultant, I sort of felt tempted to come in with some big theological concepts about how this church could grow.  I was tempted to talk about "Missionalism" or "Simple Church" or "Total Quality Management".  But I knew that none of these concepts was the "magic bullet" of what would help the church, at the end of the day.  What this church needed was to be:

I said; "Ok, to start with, someone needs to get out there are pull some of those weeds in front of the church sign.  And then, we need to clean up this office.  And the cross out front needs to be re-painted.  And most important, we need to get to the nursing home and see some of those who are there, who haven't had visitors in a long time."  My advice was basic, but over the next several months it proved that it was helpful.  The church began to grow again, there was positive spiritual-energy in the church where there had been waning activity.

Posted by Graham Baird at 9:46 AM No comments: 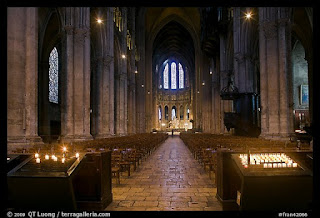 In north, central France, there is a cathedral that was built in the 12th century and that is one of the most stunning architectural achievements in history.  It is the Chartres Cathedral, in Chartres, France.  With flying buttresses, French Gothic masterpieces, hundreds of ornate sculptures surrounding the building, original windows that still survive intact, and 350 foot ceilings at the high point of the nave, it is truly one of the wonders of the world.

What many people do not know is that the central isle of Chartres Cathedral also has a very unique design.  One of these design features is that it has a slightly slanted central isle - slanted upwards from the back doors of the church to the altar.  In other words, when you enter the cathedral, there is a slight incline as the central isle moves towards the front.  Scholars have debated about this unique architectural facet for years.  Some think it was an intentional theological part of the original design, so that those who walk in the back of the church are literally walking upwards as they approach the altar up front.  Others think that the incline is simply due to years of sinking ground, and settling structures, from centuries of use.

But my favorite explanation for this architectural peculiarity is that the floor slants downwards towards the back door because years ago, animals were often brought into the church to be blessed by the priest, and for high religious ceremonies.  Sometimes those animals, while walking down the isle (or up the isle, as the case would seem to be), would leave behind traces of what animals do best - poop.  The easiest way to clean the cathedral, then, was to simply broom-push and wash the animal excrement downhill starting at the high point on the altar, and brooming it downhill through the back door of the church.

This image, of having a slanted door and washing out animal waste has got me thinking.  And I am wondering weather it wouldn't be a good idea for modern churches to have the same slanted floor-plan phenomenon - so that all of the bad things that sometimes happen in the middle of churches can then be easily washed out and washed away.  Consider this:

Every Sunday each of us brings with us to church, a certain amount of fecal matter that has collected in our lives from the week before (most people call this "sin").  We bring it to church, and during confession, we pray a corporate prayer of assurance of pardon.  And that usually does the trick.  But what if, instead, all of that waste product that is built up in our lives, could just be shot out the back door with a great power-washing of the central church isle every week?

How much easier would it be, for example, after a particularly difficult church board meeting, to just say, "Ok, a lot of hard things were said here tonight, before we leave, we are just going to broom/wash away all the crud that has collected over the evening."

All of the pain that is sometimes experienced in church - people letting us down, of hopes of the future not being fruited, of expectations not being met, of the unkind things that are sometimes said in church - they could, with one great washing and spraying, be sent right out the back door of the church.

What if the next time a church was involved in a case of abuse or graft and criminality (as sometimes happens), rather than years of working through painful and difficult legal cases, all of the awful raw waste product could just be shoved out the back door?

One of the things I love about the, and why don't we give it a name...

Is that it puts in place an expectation for bad things to happen in church, and for there to be a public and regular cleansing of those things.  One of the hurdles some churches face is that when bad things occur, there is sense of surprise or shock - "How could such a thing occur (I have heard people say)...in a church".  With the Chartres Model, there is a predetermined notion that bad stuff will occur there, and there will need to be a public washing.

I also like the notion that all people, whatever they have done, or might potentially do (and in this case, all animals), are welcome in church.  My favorite phrase here is - "No perfect people allowed".  Another way of saying this might be, "Come to our church, bring whatever you are, and whatever you will leave here, and we will wash it out the back door."  There, in church, they could then bring all of their "waste".  And then leave it behind, and then wash it out.

One last thing.  The Chartres Model brings new meaning to the lyrics of old church hymn, "All things bright and beautiful, all creatures great and small, all things wise and wonderful, the Lord God made them all..."

And then washed out the back door, whatever else was left behind:-)


Posted by Graham Baird at 9:53 AM No comments: