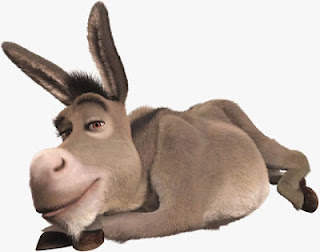 I was speaking to a friend recently who was going on and on about how much she "dislikes" Christians.  (Don't you love conversations like these?).  The friend, and I mean friend, all of us need people in our lives who don't see the world exactly as we see it - I call them my Spiritual ombudsmen.  The usual list of complaints followed the initial invective of the word "dislike".  "Christians," said my friend, "are culturally shallow, they have a history that is full of violence, they are hypocrites, and they are judgmental.  Christians are disengaged, uninformed, uninterested in the real problems which face the world."   I had heard the list before.  My response to such critiques has always been the same, "I never try to defend Christians.  Christians are people too, and none of us is perfect.  But I will defend Christ.  Christ is always perfect."

But, then my friend threw out a critique that I hadn't heard before, and one which has caused me to stop and think a moment before I responded.  She said, "And the thing I dislike the most about Christians is that they pray about so many dumb little things.  They pray about parking spaces and hang nails and for good tables at restaurants and for isle seats.  I mean, do you think God really cares about these little things?"  Hmmm, she had a point.  God is pretty important, He does rule the world, and He may not actually have time for a lot of our littler prayers.  But then, I made a great discovery in my Bible this past week, which is a response to my friend's critique, and I believe a word from God.

God often takes our small prayers and converts them into great big plans for the kingdom of God.  I call these small requests that we make of God our;

Donkey prayers are tiny, piddly, little, minor prayers that are so small that we are almost embarrassed to mention them.  Donkey prayers are prayers for a good wi-fi connection, that my indigestion will go away, that I will have lots of bars on my cell phone, that I won't run into traffic, that I will write a good blog post... and the list goes on...

The first donkey prayer in the history of small prayers was an errand that we read about in the book of Samuel, where a man named Kish sends his son, by the name of Saul, on an errand to go and find the donkeys that have run away from the family barn.  Saul and his servant friend look high and low for the donkeys but they do not find them.  The Bible says, "They passed through the mountains of Ephraim and through the land of Shalisha, but them did not find them.  They passed through the land of Shaalim and they were not there.  They passed through the land of Benjamites, but they did not find them." (1 Samuel 9:4)  Finally, in desperation, the boys go to visit a prophet, a man of God, a seer, a visionary named Samuel, to get advice about where the donkeys are.  In modern day parlance, we would refer to this visit to Samuel to get advice about a donkey as a silly prayer.  These boys are going to God for advice about a very small and insignificant thing - donkeys.

Now, a day before the boys go to the prophet, God actually speaks to Samuel and says, "Tomorrow about this time I will send you a man from the land of Benjamin, and you shall anoint him commander over all my people Israel."  Sure enough, the next morning a young boy, the kid in question named Saul, would walk in with his servant and ask the prophet Samuel for advice about his donkeys.  Samuel then tells Saul that God has chosen him for a much higher purpose, to lead a nation, to be a king.  God would turn that prayer about donkeys into the beginning of the monarchy for the Israelite people, a monarchy that would lead genealogically to the savior of the world, Jesus, some 600 years later.

So, my friend, if you are reading this post, I will close with this.  Yes, Christians can sometimes be short-sighted, yes they can sometimes be small, yes they don't always see the larger picture, yes they can suffer from tendencies towards hypocrisy.  I count myself in that group.  However, I would not be so quick to dismiss their small prayers, because history has shown that God has the power to turn very small prayers - our donkey prayers, into great things for the kingdom. 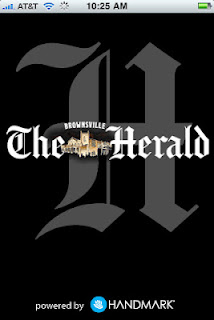 Have you ever noticed that sometimes old fashioned words are the only way to express modern day emotions? The word "hark," for example, has no modern day equivalent. You just don't hear people say things like, "Hark, I'm tired," anymore or "Hark, that was a bad call by the ref." "Hark," Webster's Third International Dictionary tells us is a combination of two word thoughts. Hark means, "to listen, or give ear to," and "to shout encouragement or guidance to." The only time we ever use the word, "hark" is in the Christmas carol, "Hark, the Herald Angels Sing." Replacing "hark" with a modern day equivalent, "listen to the Herald Angels Sing," just doesn't have the same punch (Come to think of it, the word Herald is underused as well...).
Herald - "an official crier or messenger," or, "the name of your next door neighbor who is in his eighties and wakes up before dawn to mow the lawn." (And then Herald read The Daily Herald).
The word "Rejoice" is also a word you never hear used anymore. I put the word rejoice in my weekly missive to my staff in an email from the pastor. Actually, I used it about five times in a row, and I am pretty sure my staff now think that I am taking too many cold medications. The word Rejoice, a derivative of joy, stems back to New Testament Greek, and the time of the apostle Paul who invented the word = CHARIS - XARIS. Charis is a word whose combined meaning "gift", "joy", and "grace". When Paul, in the book of Philippians says the word, Rejoice, he is making up a word, which we often translate to "grace." Boldly, Paul doesn't just use the new word he invented once, he uses it in nearly every sentence, "Christ should be proclaimed in every way, whether out of false motives or true, and in that I REJOICE. Yes, and I will continue to REJOICE," (Philippians 1:18) Paul is literally saying here, "Yes, I will continue to throw gifts...." Paul's staff probably also thought he was on too many cold medications...
I'm going to try to use the word Hark, Rejoice, and Herald in the same sentence sometime today...and do it in a way that I hopefully won't get me punched in the nose.
All For Now,
By Jove,
GB
Posted by Graham Baird at 7:19 AM 1 comment: 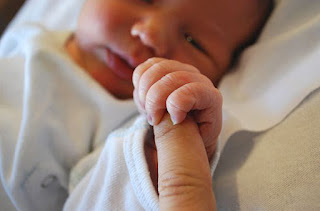 Star and I just found out the very exciting news that in about five months time, we will be the proud parents of a little girl. We, of course, knew that we were going to be having a baby, we did not know that our baby will be a little girl. And this means, of course, that the next generation of pastors in the Baird family will all be women (just kidding, no pressure on my kids. As my Dad told me once, "If you can be anything else in life, other than be a minister, please do that thing..." I will offer my own kids the same advice).
I have been reading up on Child Development assiduously, in preparation for our new child. I am reading-up on diapering and bathing and swaddling and caring for babies in all ways. I am also reading-up on the topic of natural infant reflexes. Of particular interest to me is the famous, "infant grip reflex". The Infant Grip Reflex is the reflex phenomenon that infants will grip anything that is put in their hands. For example, if you put your hand into their tiny hand, and a child will automatically reflex their hand around your hand. Scientists are unsure about the purpose for the reflex, except that it possibly dates back to a time when infants needed to grip their parents while running through rain-forests away from wild beasts. But they are unsure. The miracle of reflexive responses, even in tiny infants, means that all humans have intuitive, reflexive responses to life, even from the earliest of ages.
I believe that humans also have a reflexive response to God. The reflexive response that all humans have to God is love. That is, that the natural human, reflexive response to God, is worship of God - is praise and adoration. To put it in the language of B. Pascal, all humans have a "God shaped hole in their hearts, that only God can fill." A natural human heart reflexively has an open stream of communication, excitement, joy, a free-way of love which connects us to God.
The question then remains, why don't all people maintain this reflexive response to God throughout our lives. Why are there some people who maintain their reflexive response to God, and some people who don't. I'm not sure. One answer I have arrived at is that we all have preventatives, I call them "filters", which enter our lives and which prevent us from the natural reflexive position of our hearts for praise. Our filters can be made up of many things; pain incurred through the process of life, sin, intellectual numbness, over-simplification of the Gospel, personal doubt and questioning of self, and the list goes on and on.
This past week's message focussed on the entry of Jesus into Jerusalem, riding the colt of a donkey - the fulfillment of prophecy - Palm Sunday. What was incredible to experience in this text was the natural reflexive response that people had to God/Jesus riding into Jerusalem on that Sunday. The text says, "When he came near the place where the road goes down the Mount of Olives, the while crowd of disciples began joyfully to praise God in loud voices for all the miracles they had seen," (Luke 19:37). This adulation that Jesus received was, I believe a natural human reflexive response to the presence of Christ.
The natural reflex response to Jesus Christ for all human beings is love.
As we begin Easter week, here is my questions; "How firm is your grip reflex with regard to Jesus Christ? Are you holding firm? Is your body naturally expressing praise for God? Do you have filters in the way which are blocking your body and soul's natural response to God?"
All for Now,
GB
Posted by Graham Baird at 10:45 AM No comments: