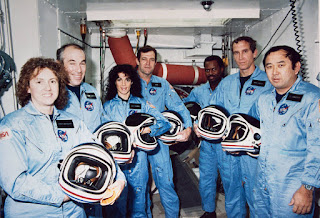 It has been a couple of weeks since I wrote a blog post.  Thank you for your patience in my absence.

Not long after our baby was born - Ewan Arthur Baird on July 27 - I had to leave and go to Fuller Seminary in Pasadena to take my final class for my DMin.  Thanks need to be given to my mom for coming in to help for a week, and to my wife who deserves a medal of honor (not the purple heart) for her extra work and care.

The class I took last week at Fuller was from Rev. Dr. Reggie McNeal, who is an author, pastor and church consultant who has been involved in the lives of pastors and churches for the better part of a half century in the United States.  Much of what "Reggie" offered was so helpful, but the most lasting and indelible thought he offered was this:

A couple of years after the 1986 Challenger Disaster - you remember the disaster - in which seven astronauts (Francis Scobee, Michael Smith, Ronald McNair, Ellison Onizuka, Judith Resnik, Gregory Jarvis and, of course, Christa McAuliffe, pictured above) were instantly killed as that space craft "slipped the surly bonds of earth", the main astronaut recruiter for that journey was wracked with pain.  How could he have asked so many young people to be a part of a mission that ended so tragically?  How could the families of the lost loved ones ever move on?  How could a school teacher, Christa McAuliffe, and all of the school children around America that watched her on that day, ever move forward?  Even 30 years after that disaster, those of us who watched our television screens that morning will never erase the scenes of the space shuttle exploding from our memories.  I was in a Junior High physics class.

Die Doing What They Loved

For many of the astronauts, they had dreamed and planned for that space shuttle moment their entire lives.  The training and focus and attention and rigor involved in going into space in a shuttle is a dream that began, for many of them, when they were just 8 and 9 years old at the "Space Camp" being offered at the local YMCA in their hometowns.  For all of their lives, they trained for the moment of going into space.  As children, their personal bookshelves were filled with books about Mars, Rockets, The Moon Landing, The Solar System, The Universe.  Perhaps their first favorite book was - "Goodnight Moon" as they drifted off to sleep, imagining that they might someday visit the moon.  And then they got to go into space on the space shuttle Challenger.  And in their last moments they;

Died Doing What They Loved

I have a friend who is a backpacker, who likes to go on 10-day extreme backpacking trips in remote regions of the world.  He has backpacked all of his life, but now that he is in his mid-seventies, his family have told him that it isn't that safe for him to be going on these long trips anymore.  As it was related to me, one family member recently said to the other; "Jim, it's just not safe.  There's no one to come and get you if you run into trouble.  Please hear what I'm saying, you might die up there."  In response, the septuagenarian is reported to have said; "That's fine, that would be a great way to die, up in nature.  That's how I want to die."  To...

In an equally tragically iconic moment in America, and one who's anniversary is coming-up once again - Sept. 11, there remains a question.  All of us have similarly vivid images in our minds of the horror of two twin towers collapsing.  The question which comes to me, however, these 15 years later is - "Were the people who died in those burning buildings doing what they loved to do most - right at the end of their lives?  Were those who were working in Wall Street brokerage firms, and stock analysis offices coming to work each morning and saying to themselves, 'If this was my last day on earth, would I be doing the thing that I most love to do?'"  Or was their work drudgery?  Were their tasks rudimentary and bland and depressing?  I don't know the answer to this question, but I wonder.  Did those 2,996 souls...

Die Doing What They Loved

I can honestly say that being a pastor is one of the things that I love in life.  I love preparing for messages, and offering them to people whose souls are hurting or confused.  I love being able to work with the Holy Spirit to bring about good and change in the world.  I don't love everything about being a pastor, but I love most things.  And, I love being a dad to three young kids, and a husband to a wonderful wife.  I am doing what I love....

GB
Posted by Graham Baird at 10:21 AM No comments: 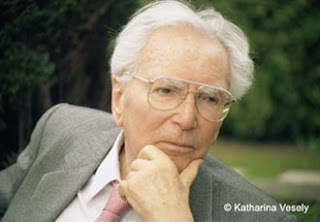 This week has been a great flurry of change in our household with the birth of our son - Ewan Arthur Baird - as well starting a new Stated Supply Pastoral position at Goleta Presbyterian Church (more on that later).  In the midst of all of this my computer crashed, so it has been quite a fun time:-)

Given the transition in my personal life, and in lieu of a formal blog-post this week, I thought I would simply include a link to a recent newspaper article that was written recently in The Camarillo Acorn Newspaper, about the most significant book in my spiritual life.  The most significant book of my spiritual life has been, "Man's Search For Meaning" by Victor Frankl (Frankl's photo is inserted above).  Here is the link, thank you so much for understanding about my not writing a formal post.  I will be back with more next week:

GB
Posted by Graham Baird at 1:19 PM No comments: 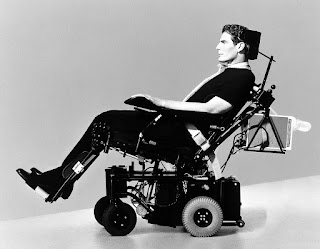 It has been just five days since the birth of my son and third child - Ewan Arthur Baird - and I don't have any deep insights or profound thoughts about childbirth to write about, except that it certainly is a sheer miracle!  More to come on this topic for sure:-)  Thanks for your prayers and support!

What I do have an insight about this morning is an idea that came to me earlier this week regarding the ability to tackle life's difficult projects.  If you ever have a long list of to impossible tasks do in one day, always take on the most challenging ones first.

And the rest of the day will, by comparison, seem like a breeze.

The other morning, in the midst of the birth of our new son, I discovered what might be described as a bio-hazard spill in one of our bathrooms.  Raw sewage was quite literally piled so high in one toilet that it almost reached the top of the bowl.  After doing some basic reconnaissance intelligence gathering on the incident, I learned that another one of my children had continued to use the toilet whenever necessary, but had "forgotten" to flush it - for like 7 days.  The pile of sewage was too big to flush and would have to be hand delivered from the toilet to a garbage bag.  It was my first task of the day.  Nothing like the smell of "napalm poop" in the morning.  Ahead of me that day was a long list of other challenging assignments (a newsletter to script, sermon to write, a board meeting to prepare for).   But nothing compared to that first HazMat operation of the day, and everything was, as they say, downhill from there.

I have a friend who is an elementary school principal in a very entitled neighborhood in Santa Barbara.  The parents of the kids who attend this school expect the very best for their progeny, even if their progeny have the very least to offer.  Parents regularly tell my friend, the principal, that they will "Sue the school if their kid's doesn't get a higher grade on an assignment," "File a complaint with the school board if their child doesn't win an award in a diorama competition," "Request an inter-district transfer if their daughter does not end up in the top 5% of their class".  My friend actually once got a death threat from an overzealous and irate parent.  It's a really hard job being a principal in this neighborhood.  Every Monday, my friend comes into his office to answer complaint phone calls from parents, that were left on the school answering machine from the weekend before.  There are usually a pile of 20 post-it notes on the desk.  My friend has asked his secretary to list the complaints in terms of the "most angry" parents at the top of the pile, and the "least angry" parents at the bottom of the pile.  As a way of beginning to deal with the torrent of negative energy coming his way, my friend has figured out a way to move through it.  Take the hardest phone call first, and the rest of the interactions will come easier.

The late actor and equestrian star, Christopher Reeve, once told a reporter how he was able to move through each day, even though he was paralyzed from the neck-down because of a horseback riding accident.  Reeve said, "Each morning, I begin my day by having someone help me put my clothes on.  It is a painstaking and laborious process that seems to take forever.  After I am dressed I move my electric wheel-chair into the bathroom, and park it in front of the mirror.  Then, I cry for 20 minutes.  I cry every single day for 20 minutes.  This sucks, I tell myself.  This is horrible.  I hate this.  But then I always say three words after that; 'And Now Forward - And Now Forward'."  Reeve observed that after his regularly scheduled 20 minute morning cry, and saying those three words, the rest of what he had to face that day was doable and possible.

The process of being born is another example of experiencing one of the hardest life experiences first, of dealing with one of the biggest challenges right at the beginning (I lied, maybe I do have some insights about child birth).  The process of coming into this world - of being born - is extremely traumatic.  To move from a nice, warm, safe, comforting and enclosed space into the bright lights, and grabbing hands of a surgery room or a birthing table, is, to use a cliche - a rude awakening.  From  the birth itself there is a torrent of challenging experiences - an umbilical cord is cut, shots are administered, blood is drawn, measurements are taken, if you are a boy a circumcision is performed.  All very hard things - right at the beginning.

The rest of life after that birthing process isn't exactly a cake walk.  There will be days when all of us have to clean-up biohazard with our barehands - but at least we will know deep down that we are capable of "handling" (no pun intended) life's toughest challenges.


Posted by Graham Baird at 7:19 AM No comments: