"Just Come Along, It Will Be Good For You" 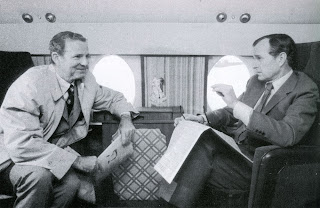 I want to tread for a moment, ever so carefully, into political waters, but only in order to make a larger point about evangelism. Highlands, as you may know, is assiduously a-political, and so are most of it's pastors. We never talk about party or political affiliation, we never promote one party or another, we do speak strongly about moral issues, but not from a political standpoint. We are a-political not because we don't believe strongly in politics. Nor do we feel that politics aren't very important. But most of all we feel that calling ourselves followers Christ is our first and most important calling.
That said, I just heard a powerful illustration about the import of reaching out to people when they are in a time of need, and inviting them to "just come along," simply because it will be "good for them" to be in attendance.
Throughout the entire 1960's, former Secretary of State James Baker III was an active member of the Democratic party in Texas. James Baker had worked with Lloyd Bentzen and others in the Democratic political establishment of Texas in order to further the causes that he felt were near and dear to his heart. Towards the end of the 1960's James Baker's first wife, Mary Stuart McHenry was diagnosed with a very scary, and what would turn out to be terminal case of breast cancer. James Baker was, of course, grief stricken and comatose with fear and dread over the potential loss of his life's soul mate and wife. Mary would eventually succumb to the ravages of breast cancer in 1970. James Baker became a broken man. Nothing could console him. Nothing would pull James Baker out of his sadness and depression.
One day, a man named George Herbert Walker Bush (he was then known as he is now by his two middle initials H.W.) connected with James Baker at the Houston Country Club. From across the room H.W. could see that James Baker was enshrouded with a cloud of grief and that he carried a heavy weight upon his entire countenance. H.W. strode across the room and said, "James, you don't know me, but I'm George Bush, and I knew your wife, and I am so sorry for your loss." "Thank you," said James Baker. "I know that she was an amazing woman and there will never be a replacement." "Thank you" said James Baker again. "There is one thing I wanted to ask you, though" said George Bush, "and that is if you would be willing to come this afternoon with me to a rally I am hosting for my run for US Senate." "Oh, no, thanks" said James, "I don't think so, but also, remember I am a Democrat not a Republican." "I know," said Bush, (and then he said the words) "But...Just come along, It will be good for you." For some unknown reason James decided to attend that rally that afternoon - that it couldn't hurt to go to a rally, that maybe it would actually be good for him. And so he went...and the rest is history. James Baker eventually joined the Republican Party and became one of the most influential Secretaries of State of the past century.
Obviously this illustration, told in the midst of one of the most divisive political seasons in the United States' history, cannot be seen in an entirely a-political, non-political light. Obviously politics today is as loaded as a cruise missile, and unfortunately, nearly as dangerous. However this story, for me, is such an important example of the power of just inviting people along to something. People don't have to understand why they are attending an event, or a small group, or a church service, or a worship night, or a weekly Bible study, or whatever. The only important thing is that we "invite people along" because it will be "good for them." And what is also exceptionally important as people are "invited along" is the transformative impact of being a part of a larger group of followers, of believers, of people who offer hope and joy and perspective.
So, invite someone to "just come along." Tell them, "It will be good for them." Who knows, you might just change history in the process...
All for Now,
GB
Posted by Graham Baird at 4:15 PM