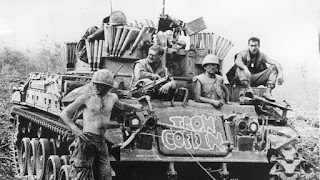 On April 30th, 1975, the war in Vietnam officially came to a close with the fall of Saigon.  The 19 year conflict between the United States and Vietnam, played out on the larger stage of global containment of communism, marks one of the darkest chapters in our country's history.  For those who fought in that war, the return home was anything but celebratory or uplifting.  Many Vietnam Vets returned to a country riven with racial, cultural, sexual and generational schism.  "But at least it's over," most people told themselves.  "That awful chapter in American and world history has been closed forever."  According to a recent study by the American Psychological Association, however, the war has actually continued for thousands and thousands of Americans.

A recent study published by the Los Angeles times found that 40 years after the end of the Vietnam War, 11% of Vets who fought in that conflict are still suffering from Post Traumatic Stress Disorder (PTSD).  Even though treatments for PTSD have improved remarkably, and there is a much more nuanced understanding of the effects and impacts of war on the human psyche, the lingering impacts of deep stress, trauma, still exist.

What this means in practical terms is that for those who fought in the Vietnam War, 11% of them still wake up in cold sweats, 11% have flashbacks to the war, 11% have difficulty maintaining healthy relationships, 11% have turned to drugs and alcohol to blot out the pain, 11% have lingering psychosomatic medical maladies, 11% have sometimes turned to homelessness as the only answer for their pain.

When I read this study, I was dumbfounded, and it has raised a penumbra of questions for me.  How can people still suffer from a trauma 40 years after that trauma?  How can a trauma that we face have such a deep impact on the human emotional condition that it still leaves a mark almost half a lifetime after the initial stress?

Far be it for me to compare my own life to the deep and devastating impacts of fighting in a war, however, like you (I am sure), I have suffered a series of smaller traumas in my life.  Even though I have "worked through" many of those traumas (and am still working through some of them), I must admit that some of my own traumas have etched scarred rivulets in my soul.  But I have recovered from these.  What about those who haven't recovered from traumas?

Dear God, Please be with the Vietnam Vets, and Vets everywhere, this morning who still suffer from PTSD.  Help them to heal!