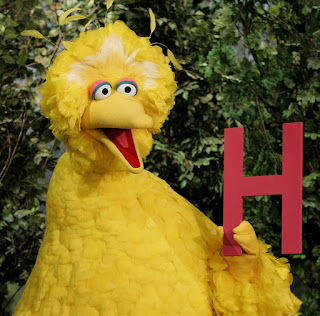 Maybe you heard the news this past week.  Sesame Street, the children's television program that quite literally raised an entire generation of young Americans, and was the leading edge in bridging the racial and cultural divide in this country's inner cities, is moving to HBO.  That's right, Grover, Big Bird, Kermit, Bert and Ernie and The Grouch will all be teaming up with other HBO specials like, "Game of Thrones" "True Detective" and "Veep".  What once was a public program (Public Broadcasting Service) is now a totally private entity (Private Broadcasting Service).  I'm pretty sure that moaning and groaning sound is Jim Henson, the founder of The Muppet Show and the inventor of many of the characters on Sesame Street, rolling in his grave.

Sesame Street's top executive, Jeffrey Dunn, cited several important reasons why this corporate move occurred.  First, he said, kids today are not watching television in the same way that they were in previous generations.  Most kids watch, "On Demand" programming, rather than tuning in at a specific time and place to watch a television program.  Many of these "On Demand" options are actually pay per view purchases (As a father of a three year old, I can attest to this.  Just last month, my daughter Sheena put around $100 worth of programming purchases on her Kindle - by herself.  We called and contested the charges, and had them overturned).  Also, and most importantly, PBS is not raising the kind of money that they used to from the general public in putting quality programming on the air.  People are watching television content in different ways than they used to, and people aren't giving to non-profits as they have in days of old.

This corporate merger certainly poses some interesting concepts in Sesame Street's programing future.  Here are some possibilities.  Instead of "Game of Thrones", it could be "Game of Big Bird". And there are many other options:

Ernie and Bert and James Gandolfini in "The Muppets and Sopranos"
Kermit and Vince Vaughn in "True Kid Detective"
Mr. Hooper could be Julia Luis Dreyfus' new Vice President in "Veep Veep, Here Comes the Bus"
"This episode of Sesame Street is sponsored by three letters....HBO"

Setting aside the endless puns and programming possibilities surrounding the merger of Sesame Street and HBO, I actually think that this corporate decision has great portent for all non-profits today, including churches.

All Non-Profits and Churches Are Facing Funding Challenges
It is not just non-profit programs like Sesame Street that are seeing a decline in funding, so are all non-profits and churches.  When I compare the per capita giving by members of the church today, verses almost two decades ago when I began my ministry, the decrease is sizable and noticeable.  People are just giving less than they used to.  The public sense of responsibility to individually support non-profits and churches simply doesn't exist the way it used to.

On Demand Religious Content Will Replace Regular Church Attendance
In the same way that parents don't sit their kids down to a regular dose of Sesame Street on television at the same time each weekday, people are less likely to think of church as a regular occurrence in the weekly schedule.  As a new Church Development, we have been amazed at the number of people around the world who are tuning in to watch one of our worship videos, instead of attending our church on a Sunday morning.  Just this weekend we had several new countries join our video audience (India, Ireland, and Albania).

Larger Sponsorship Will Be An Important Component of Non-profit Assistance
The main reason that Sesame Street moved to HBO is because of the huge bank roll that they provide the television show going forward.  Most churches I know today also rely on both individual gifts from members of a church as well as the outside support and sponsorship of generous benefactors and donors.  Mission Street Church, simply put, would not be where it is today without the generous help of many incredible benefactors.

Of course, the change in viewers habits and funding sources does pose some interesting questions for the future of Sesame Street.  What about households in America that cannot afford cable, or "On Demand" programming?  What about the content of the show that was committed to bringing multiculturalism to young people's lives - will that come to an end?  HBO is mostly about entertainment, not education, will Sesame Street become pure entertainment or will it continue to educate?  Is this the end of PBS as we know it?

No one knows the answers to these questions for sure.  For now, it is safe to say that the end of the once famous song on Sesame Street, "Can you tell me how to get, how to get to Sesame Street" might have a new answer...."just turn right on....Wall Street".