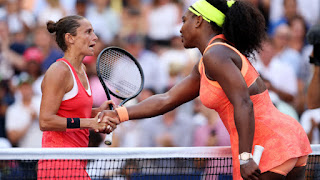 Many of the Bible's stories don't ring true.  While they are often accounts of incredible feats of bravery, miraculous intervention, God's total sovereignty, it is sometimes hard to believe that they actually happened.  Whether it be a talking donkey, a fish that swallows a human whole, a coin found in the mouth of a trout, water turned into wine or a grown man walking on water, these stories just seem so far from the realities of our own world, that they seem like things of fiction.  I don't mean to suggest that these events didn't occur, it's just that it is hard to believe them sometimes.

However, a sports tournament that took place this past week in the United States points to the probability that one of the Bible's miracles actually happened.  In Queens New York, the site of the US Open Tennis Tournament, on a humid blue tarmac tennis court, a match between the world's greatest tennis player ever, Serena Williams, and a come from nowhere player from Taranto, Italy, Roberta Vinci, was nothing less than a modern day story of:

Now, before I begin the comparison, I want to say that Serena Williams is an incredible individual with a wonderful heart.  She has received mounds of unfair criticism throughout her career.  So, any comparison I make of Serena with Goliath in this blog is purely about strength and ability, and not any other moral or character besmirching quality.

First, to Serena.  She is simply the best women's player ever to hold a tennis racket.  She is one of the few players ever, male or female, to have held all four major singles titles simultaneously.  She has 21 gland slam titles.  Serena simply plays at a level heretofore unheard of in women's tennis.  During her tennis match with Roberta Vinci, Serena actually clocked an ace serve at 127 miles per hour.  Prior to her loss to Roberta, she was set to win the vaunted calendar Grand Slam (three major titles in one year).

Now to Roberta Vinci.  Before her win against Serena last week, Roberta was ranked 43rd in the world.  The daughter of an accountant and a housewife, she was born in rural Italy - Taranto.  The odds of her winning against Serena, by some estimates were 300-1, and by others 657-1.  While Serena regularly hit serves to Roberta at over 120 miles per hour, Roberta's more ordinary serve was around 79 miles per hour.  Her advance to the finals at the US Open (a game which she actually lost) was her first major grand slam final.

But it was Roberta's post-game interview after beating Serena which sent shivers of appreciation down the spines of all the viewers; [In broken English with an Italian accent] "I try to enjoy it...I try not to think about Serena...I didn't expect that I win...I just think 'put the ball in the court....don't think about Serena'".

I wonder if on a windy, wilderness battlefield in the foothills of Western Israel, in about the year 1,000 BC, David didn't say the same thing about his foe; "I try to enjoy it...I try not to think about Goliath...I don't expect to win...I just think..put the rock on the forehead....don't think about Goliath."

David slew the giant, and Roberta (an equally mundane name for a champion) slew the giant of tennis.  From time to time, now and then, the Bible proves that it's stories, though hard to believe, are true.