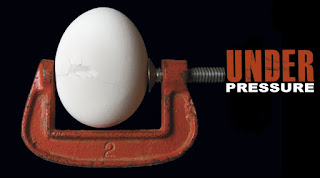 This week's blog post is an homage to the life and death of one of the greatest creative rock and roll geniuses of the 20th century (David Bowie), and a highlight of a brand new sermon series that I started this past week; "No Pressure: How To Connect People With God In a Postmodern World".

When the rock band Queen in collaboration with David Bowie released their hit song, "Under Pressure" in 1981, nobody could ever have imagined how prescient and prophetic the lyrics would turn out to be.  The words spoke to the harried existences of modern people.  Here is how the song opens:

Again, these lyrics were meant to describe the modern life - a life that's highly under pressure.

San Francisco Theological Seminary recently asked me to deliver a series of talks (lectures) on the topic of evangelism.  More broadly they have asked me to come and talk about how the modern church can begin to recapture for God the hearts and minds of young people in the world today.  As I have thought about this question, in the start of my third New Church Development, I have realized that there is one singular reason that people don't have time for God these days.  It isn't because they don't believe in Jesus.  It isn't because they aren't familiar with the Bible stories.  It isn't even because of the recent generational revulsion of organized religion.  It is simply because they don't have....TIME...for God.  Simply put, they are:

I don't believe that the world has ever been more "pressurized" than it is today.  With computers and cell phones putting people in almost constant touch with information and telecommunication there is no space left for the human soul to rest.  While there have certainly been moments of more overall devastation in world history, there has never been a time of more constant engagement.  With the constancy of activity, and action, and movement and motion, our lives have become totally

On Christmas morning, our family woke up and opened up our presents, which took the girls about 3 and a half minutes.  After breakfast we boarded a plane from Southern California Burbank airport to fly home to Sacramento (why did we fly? of course because we were under a time crunch to make the most of our time with family...we were Under Pressure).  When we arrived, we noticed something different about Sacramento.  As we breathed outside our breath could be seen as white plumes of steam.  Our fingers tingled.  Our lungs stung.  The thermometer on the car dashboard read - 28 degrees.  What was this strange and different thing we asked our parents?  They explained to us that this was what was known as....WINTER.  As Southern Californians we weren't familiar with this phenomenon.

It was so cold over the holidays in Sacramento that we actually weren't able to get out and do a whole lot of anything.  We were forced to sit in front of the TV and drink hot coco and bundle up under blankets and warm our feet by the fire.  At first it was sort of annoying, but then we realized how fun it was to actually sit and do...NOTHING.  It was wonderful to go inwards for one week and not always live outwards.  It was so nice for a moment to not be:

When we arrived home, we were happily met by the annual El Nino rains.  Perhaps we might be able to spend a couple of days of down-time before the school year began.  It was raining so hard that the droplets formed large circles the size of magnifying glasses on the car windows.  And then a glorious miracle took place.  As I was sitting at my desk writing my weekly Bible study, all of a sudden, the lights in the house flickered and they went dark.  The power had gone out.  "Finally", I said to myself, we can now slow down a bit.  We can now experience our own form of WINTER.  We can rest.

But then, as luck would have it, I heard a motor start up outside my office window, and a generator kick into action, and the lights went back on again.  It turns out that the previous owners of the house we are now renting installed an electric generator for the house to kick in if ever the power went out.  Even as the natural forces of the world were trying to force us to slow down, our modern contrivances were trying to get us to speed up.  Once again, we were:

The Christian life should be marked by many things: love, joy, perseverance, generosity and forgiveness.  However, one all too important dimension of the Christian life often gets overlooked - Peace.  Jesus said, "Come to me all who are weary and carry heavy burdens, and I will give you rest" (Matt. 11:28).   As Christ followers we should be a people who are not always:

To paraphrase an old Christian campfire song: "They will know we are Christians...because we are calm."

To quote David Bowie, "Love dares you to change our way of caring about ourselves."