What Is Your Lake Of Peace? 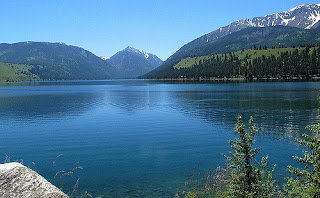 For the past several months, I have been commuting between our home in Oxnard to my place of work in Goleta (about 40 minutes to an hour depending on traffic, each way).  Every morning, I set out around 7:45, then drop both girls off at school in Ventura, then I proceed up the coast on highway 101 to Goleta, which is located just north of Santa Barbara.  Then, every afternoon, I pack up my care and woe, throw it all in my briefcase, and I drive back to Oxnard (again, around 40 minutes to an hour, depending on traffic).  When people hear about my commute each day they often comment that,; "you poor thing", "it is such a pain to commute such a distance," or "what a drag to have to drive that far between work and home".  When people say this, I always smile and say, "No, the drive is one of the best parts of my day."  It is my...

While studying the life of Jesus recently, I realized that one of the challenging factors of his life was that whenever Jesus was on land, he was working.  Whenever He was near a city, large or small, or even out in the country, He was always inundated with people and work to do.  The Gospels regularly site the number of times Jesus was, "surrounded by crowds", and  "everywhere Jesus went, people wanted Jesus to heal them", and "from that time on, Jesus was never alone".  Jesus' life was a non-stop ministry of teaching, healing, performing miracles, eating at people's houses, and ministering to the lost.  Even when Jesus was attempting to "get away and rest" there were people waiting for him, like the time that 5,000 people were waiting to be healed by him at the south of the sea of Galilee.

Strikingly, the only peaceful time in Jesus' life, was, actually in the middle of the lake of Galilee.  In fact, the only citation that we know of for sure when Jesus was sleeping was during his cross-lake trip, in the middle of a storm.  The Sea of Galilee was about 21 kilometers (which is the same distance as a half-marathon).  Assuming that a boat can row about as fast as the average runner can run, it would take about 2 hours to cross the lake (give or take a minute or two because of traffic - joke).  Those two hours on the cross-lake trip were Jesus' chance for rest, calm, peace, contemplation and sleep.  For Jesus, the sea of Galilee was Jesus'...

So, here's my question for you this week - what is your Lake of Peace?  a Lake of Peace is a thing that we must do as a part of our everyday chores, routines, work that is sometimes thought of as a burden or a strain, but which can actually be considered to be a blessing if you think about it in different terms.  For some people, their commute between work and home is their Lake of Peace.  The Danish philosopher, Soren Kierkegaard, had to walk from his house to his church each Sunday morning.  In Danish Kirk is the word for "church" and "ga" is the word for walk (it can also be translated as cemetery).  So, Kierkegaard's name - "church walk" is also what he did each day "a church walk".  But for Kierkegaard, the walk was his;

I know of others who have to drive children from school, to practice, to dance lessons to birthday parties to home.  Their Lake of Peace is driving their kids from here to there to everywhere.  I have a friend who works as a CPA (Certified Public Accountant).  Sometimes the work of an accountant is stressful and challenging, but usually, it is quite mundane and "brainless" addition.  For her, the Lake of Peace is filling out IRS forms.  She can do it without much thought and without much difficulty.  She is at peace when she does it.

What is your Lake of Peace?