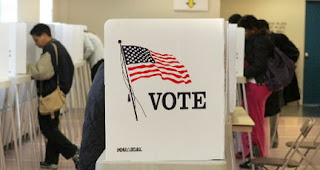 This recent Presidential election, with all of its national strife, internecine division, and angry mean-spirited rhetoric can be redeemed by God.  The addiction we all have for the latest scandals or news-grabbing headlines of this election, (I am one of the biggest election junkies that I know - I can't get enough of this presidential race - and like all addicts, I have experienced a decreasing degree of pleasure in watching it all in combination with an increasing degree of dependency on more forms of information), this election can be redeemed by an exchange for something better.

Since it is such a religiously loaded word, it might be helpful to understand what it means to "redeem" something.  When we use the word "redeem" in normal English it generally means that something can be "exchanged".  For example, I have a coupon for a sandwich at Subway which says on the back of it, "turn this coupon in and redeem it for a free sandwich."  The idea is, I guess, is that the coupon = 1 sandwich.  Redeem in this instance means exchange.  However, when we are talking about spiritual redemption, we are talking about how a bad situation, a broken thing can be exchanged for a new thing, a whole thing, a good thing.  As Christians we believe that a fallen person can be redeemed for an eternal existence through Jesus Christ.

Here are some examples that recently occurred to me involving - redeeming.

One week ago, on Halloween Monday, my two daughters were excitedly making preparations to put on their Halloween costumes and go trick or treating door to door throughout the neighborhood.  Before leaving the house, my older daughter, Haley, asked my wife Star, whether Halloween was an "evil holiday."  Haley went on to explain that at her private Christian school, several kids had said that Halloween was evil.  Star explained to Haley that what we believe as Christians (particularly as Reformed Christians) is that, "God can redeem all things".  What she meant by this was that even if Halloween had some occasionally treacherous undertones, that God was capable of making the holiday into an enjoyable one as well.

It has long been tradition that St. Patrick, when he went into Ireland to bring Christianity to the native clans there, found many of the indigenous people worshipping the sun.  As the sun rose in the morning, and the sun set at the end of the day, so they believed God rose in the morning and set in the evening.  God didn't just make the sun, God was the sun.  And a different God was the moon.  And so, for the ancient Celts, their God was represented by a circle.  When Patrick noticed the worship of the circles (as representing the sun and the moon), he thought of a way to combine the circle with the cross of Christ.  The circle could be placed at the center of the cross, and made to represent the eternal love of Christ for the world.  God can redeem pagan things.

God Can Redeem All Things

And God Redeems Elections Too!