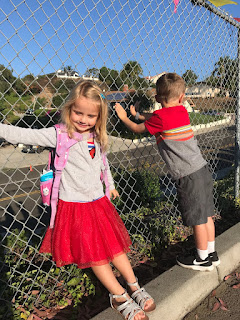 It would be hard to mark the exact moment when a current event becomes a piece of ancient history.  However, this morning, at the Christian school where my two daughters were celebrating "Patriot Day" (the picture above is of my 5 year old daughter Sheena wearing red, white and blue on "Patriot Day") I think I recognized that juncture regarding 9/11.  Sept. 11, 2001 is, of course the day when, 16 years ago, two planes were intentionally steered by a handful of religious extremists into two of the tallest buildings in the world, killing 3,000 people.  For those of us who are middle age - I am 45 - this date will always be seen as a current event.  But for anyone born on or after 2001, all of my kids for example, 9/11 is ancient history.

When I asked my daughter's excellent kindergarten teacher, Mrs. Graham (no family relation, that I know of:-), how she would explain the events of 9/11 to her class, she smiled and said, "I think I will stick to the story of Cain and Abel this morning, that will be easier to explain."  Fair enough, they are only kindergarteners!?!  And are the two stories really all that different?

Recognizing this rubicon of 9/11 moving from a current event to ancient history has made me think about the number of other important dates in history, either tragic or victorious, that have made similar transitions.

On Oct. 14, 1066, the Norman-French leader, William - the Duke of Normandy (known to every English prep school student as "William the Conquerer"), vanquished the Anglo-Saxon king Harold Godwinson at the famous battle of Hastings.  That date will, to paraphrase the American President FDR, "live on in infamy".  But here's my question for the morning.  What about 16 years after the battle of Hastings in 1082, did children who lived in England still remember the battle of Hastings as a current event, or did it become ancient history?

On May 8, 1945, as returning GI's to the United States stood in the streets of New York, kissing their war-brides in a moment of joy and elation, the West officially celebrated the end of World II in Europe.  For those who were there on that day, and there are still some people alive today to tell the story, it was a current event, and always will be.  But what about 16 years later, in 1961, did the children of war survivors still feel the same elation, or had the moment passed into ancient history? My own father, who was in high school at the time, remembers his friends all beginning to grow their hair long, and wear bell-bottomed pants, and listen to music of Joan Baez - all whipping up a head of steam about another looming American war - the Vietnam War.

On May 28, 1972, the day and year I was born, my mother still remembers watching the Nixon Watergate trials on their Sony black-and-white TV in Laguna Beach, California.  The fall of the Nixon administration under the weight of corruption and scandal of that epoch will always be, for her, a current event.  For me, however, I see Watergate as ancient history.  I was just a baby.  And, 16 years later, I was sophomore in High School, in 1988, listening to Bobbie McFerrin sing, "Don't Worry, Be Happy", on my walkman cassette radio.

When does a current event become ancient history?

The answer is simple!  The moment the next generation comes along.  And that, as the poets would say, is a good thing.  Each generation defines for itself what its focus will be.  In this way, the movement of history, from one event to the next,  has a kind of healing and palliative effect.  Today for my kids is just a day when they wear "red, white and blue to school" on - Patriot Day.

For for me, and I suspect most of those reading this blogpost, this will always be...