The Gospel of Seinfeld 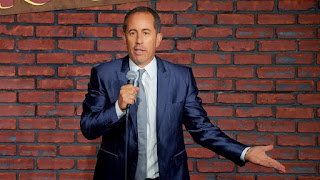 Like a lot of other Americans, I have been enjoying a series of television shows on "Netflix" (a movie streaming service), that is called, "Comedians in Cars Getting Coffee."  The premise of the show is extremely simple - it is all tied up in the title - a series of comedians who drive with Jerry Seinfeld (a comedian) who are getting coffee.  But the great nuggets of simple wisdom that are shared in the show are priceless.  Here are a couple of them:

"Pain is knowledge rushing to fill a gap" - Jerry Seinfeld
Seinfeld explains that a lot of times we don't have the knowledge we need in life.  But then we have some experience of pain, and we immediately know the truth.  Seinfeld says that an example of this might be when you are walking around your room at night, and you don't know where your bed is, but then you stub your toe on the bed, and it hurts.  Pain just helped you to learn some important knowledge:-)

"Comedy is basically a series of proofs"- Jerry Seinfeld
Again, Seinfeld explains that a good comedian stands up in front of people and says something ridiculous that needs a proof.  An example of this might be, "Why are the raisin brand people always telling us about two scoops of raisins?"  Are two scoops more compelling than one?  No one really likes raisin bran in the first place, so saying there are two scoops doesn't make it more of something someone wants to eat.

"Sometimes backstage I think, 'I don't even know why I picked this business'" Jerry Seinfeld
Seinfeld says that almost always before he goes out on stage he wonders if he is really all that funny or really has much to offer people. He is constantly amazed that people would pay good money to want to come out and hear what he has to say.  As a preacher, I can relate to this at some level.  Quite frequently I wonder if the sermon I have prepared, right before I deliver it, really has anything to offer, or is all that good.  My experience is that this is often a sign that it is, in fact, pretty good.

"Talking about comedy is like talking about sex." - Jerry Seinfeld
Seinfeld says that his favorite thing to do is to talk with other comedians about comedy.  But, in the end, he says, it's sort of fruitless.  It's like talking about sex.  In Seinfeld's words, "You can talk bout all the fancy dives you want, but it's still just a foot of water." I'm not sure I really understand this last one, but I think it relates to the fact that comedy is like diving off of a stage into a foot of water.  It's pretty basic, and in the end, it either works or it doesn't.