The Girl With A Ham Sandwich 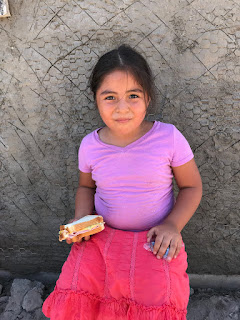 About fifteen years ago, I had the opportunity to travel to the country of Mozambique on the continent of Africa on a mission trip with Lifewater International for the purpose of helping to build a well for one of the rural tribal communities there.  The mission trip was remarkable in so many ways, but what remained with me from that trip was an image of a little girl that I met there, beside a village well, with holes in her bucket.  Her parents had both just died of the AIDS virus, and this little girl, with holes in her bucket, was effectively all on her own in the world.  She didn't even have a bucket that would hold the water that she would desperately need to survive.  A tragic metaphor of that mission field.  The image remains imbedded in my cranial hard drive and implanted in my heart.

About two weeks ago, I had the opportunity to take a similar mission trip.  This time the trip was to Mexico, the Baja peninsula with Burlpres in order to build a house for a local family who lived there. While there, our group got a chance to meet the family who would someday occupy that house, and to meet the neighborhood kids who lived on the street (I say street, but it was really just a dirt path deeply pocked with holes and boulders, reminiscent of a war zone).

One of those little children is the little girl you see in the picture above.  I don't know her name, nor will I ever know it.  Her sweet little face caught my attention one day as I was eating my lunch after a morning of work.  She had no lunch.  She did not ask for mine, though, when I offered her my sandwich, she gladly took it.  And then sat, with her back to the simple house we had just built, savoring it, as if the sandwich were a Chateaubriand steak served in a Micheline be-starred restaurant.  She will forever be for me, "The Girl With A Ham Sandwich".

Statistics for those who are poor, or "impoverished", in Mexico have become a sad platitude of daily news coverage.  However, the Mexican government estimates that 33% of the population of that nation lives in moderate poverty (live with less than $2 a day), and 9% of the country lives in extreme poverty (live with less than $1 a day).  This girl most likely meets that latter category.  Like most third world countries, there is a massive gap between the "haves and have-nots".

What the statistics cannot tell you, and what I experienced, is the relative loneliness and isolation that accompanies extreme poverty.  The children we met in the street seemed almost as happy for some company as they did to have a few sandwiches given to them on a hot summer day.  One got the sense that when these children woke up each morning, the only thing that greeted many of them were the ubiquitous stray dogs that dotted the entire countryside, and the random chicken that might amble past.

And it...yes...broke my heart to leave.  When will these children have a work caravan come through their little neighborhood (barrio) again?  When will a house building party ever come to visit again?  When will someone show some actual care to these, who Jesus called, "the least of these?".  It boggles the heart and the mind to think about.  But for me, this will be the new scene in my heart and mind that makes me want to do everything I can for those who are like her.

And, I should not close this blog without saying how beautiful she was.  How dignified she was.  How full of a sense of pride and strength she was.  She was...at least for a fleeting moment...

The Girl With A Ham Sandwich.