Don't Tip Toe Around The Cross 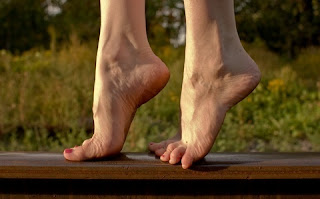 It's Friday evening and I just returned from my two week DMin. (Doctor of Ministry) class at Fuller Theological Seminary in Pasadena, California. When I say that I just returned, I mean...just returned - my car is engine is still hot and the frame is ticking - the characteristic sound of a car cooling down. I love that sound...but that's a different blog post...
I wanted to write down an idea that I heard this weekend from Dr. Paul Pierson (former chair of World Missions at Fuller Seminary, former pastor of First Presbyterian Church of Fresno, and 17 year missionary in Brazil), and who I am lucky enough to call a friend and mentor. The idea has been one which I have been mulling, contemplating, sorting-through, pulling-apart, synthesizing and thinking about for the past three hours.
Don't Tip Toe Around the Cross.
So, Paul Pierson and I have been talking for the past hour or so, and I am at his front door, in Monte Vista Grove, where he lives. I notice a book on the way out called, "The Atonement" by Tom Torrence. "Light reading?" I ask Paul. "Yeah, I try to read some serious stuff every now and then, to keep my mind fresh." Then he says, "I'll tell you a story about Tom Torrence. I (meaning Paul) and Tom Gilespie were at Tom's bedside as he was about to die. We had said our goodbyes, then, we were slowly walking out. All of a sudden, Tom, quickens from his bed, and says, 'One last thing fellas...don't ever tiptoe around the cross.' Then," said Paul, "Tom died. Those were literally Tom Torrence's last words...Don't Tip Toe Around the Cross." As I waved Paul goodbye at Monte Vista, he yelled out to me, "Remember, Don't Tiptoe Around the Cross...you can preach that!!!"
And so I will...but what does it mean?
I just returned from my trip to Pasadena, as I mentioned, and Star and Haley were both asleep. I didn't want to wake either of them up, as I know how hard it was to get Haley down for her nap, earlier this afternoon. I quietly opened the front door, and I quietly moved through the house, and I furtively came into my office here where I am writing this blog post. I TIP TOED. Why? Because I didn't want anyone to notice. I didn't want to bother anyone. I didn't want to wake them up, or cause them alarm, or do anything that made them notice that I was here. I want them to sleep.
"Don't Tip Toe Around the Cross" - must mean the same thing. It must mean living the Christ following way by:
* Not worrying who notices
* Not being upset about bothering people about it
* Not caring whether we 'wake people up'
* Not worrying if we cause people alarm
* Not just letting them sleep.
I had better go and unpack my car...very quietly:-)
All for Now,
GB
Posted by Graham Baird at 5:48 PM