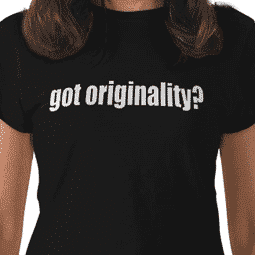 One of the great contradictions of my life, if I can be so bold and self-revealing in a first sentence of a blogpost, is that I want so badly to be unique, but in reality, my life is not all that different from anyone else's. I desire to be special, when in fact, I am special in some ways, but in many other ways, I am pretty ordinary. Most of all, the burning desire of my heart has always been to be original, but in truth, my life is so much like the lives of so many people who have come before me. I am unoriginal!
Recently, I was having lunch with a nice man who had come up to visit Highlands Church and to study all of the ways that Highlands Church is innovative. He wanted to know what our church was doing that was, "cutting edge ministry," "carving out a new path for faith," "charting a new course for Christ followers." I was honored by the fact that he wanted to visit our city and church to learn about who we were and what we were doing. I always am. But then I noticed a change in his demeanor. I noticed it, about three-quarters of the way through lunch (the moment when big realizations always occur in a lunch - though that is the subject of a different blog post). I noticed his disappointment. It cascaded like spring water, crashing down a Yosemite canyon.
"So, you do Maundy Thursday services?" "Yeah," I said. "And you do Christmas worship with traditional carols and a traditional text?" "Yep," I acknowledged. "And you start your Easter Services with the phrase, 'He is Risen?' "That's right, I said. I could see this man's hopes and expectations deflate like a hot air balloon cresting over the Himalayas. I could see his unease with our traditionalistic church liturgies and customs. We were - sin of all sins - unoriginal!
Then I gave him the Full Lewinsky (a phrase I am lifting for the use of this blog post, originally used in the wake of the Bill Clinton, Lewinsky scandal, where a person actually did all seven Sunday morning television talk shows, for the first time in history, in one single sitting). "I am a fourth generation Presbyterian Minister," I told him. He actually then said, "You're kidding right?" What he instantly saw was that not only was I not as original as he had hoped, but that I might even be the walking poster child for unoriginality.
Here's the truth. I have tried, with every crevice of my body and soul, to be original my entire life. I have tried to be outside the box. I have wanted to be a "new thing that springs up" (as the book of Isaiah so eloquently puts it). But I must admit that I am not. In some ways, what happened for me, is that my quest for originality began to become a form of idolatry in and of itself.
It was only after I realized, somewhere in my 25th year, that originality is overrated, that I began to become, really, who God wanted me to be. What I have come to learn is that my main originality as a person comes from the original love which God gives me every day. I love how the apostle Paul described himself to the church in Corinth, "I Paul, an apostle of Jesus Christ, by the will of God...." (1 Cor. 1:1). What Paul was acknowledging in this first sentence was that he was just like all of the other disciples. No better, no worse. He was unoriginal in Christ.
That's what I strive to be!
All for Now,
GB
Posted by Graham Baird at 8:42 PM