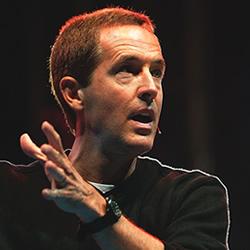 Ok, I'm sorry that I am writing about preaching for the second week in a row.  For those of you who are non-preachers, it is a bit like an auto mechanic sharing secrets on how he likes to "fix cars" (from the standpoint of the car owner, all you care about is that your car is fixed).  Be that as it may, I just read a FANTASTIC book by Andy Stanley, the pastor of Northpoint Commjnity Church in Atlanta, Georgia entitled; Deep and Wide: Creating Churches Unchurched People Love to Attend.  Andy has a chapter entitled; "Double-Barrel Preaching".  In it, he talks about how important it is that modern day preachers shed the techniques and tendencies of their forbearers in the faith.

Andy says it better; "The challenge for many of us is that we've inherited approaches to preaching that in many cases conflict with the reason we got into this to begin with....preaching was whatever you saw week after week in the church you grew up in...but You Don't Have the Luxury of Babysitting the Previous Generation's Approach to Doing Ministry.  There's no time for that.  Besides you've only got one life to give to invest in this glorious cause.  So invest it well.  Make the necessary adjustments to your approach." Remember that Andy Stanley's dad is the famous television preacher Charles Stanley, who, it could be argued had a unique and effective style of presenting the gospel in his own generation.  Andy, it could also be argued, has adopted a speaking and leading style that works for his own.

So, I have been thinking about ways that I have tried to shed some of the inherited approaches to preaching that have conflicted with the reason I got into the ministry to begin with.  I don't have a legacy like Andy's in terms the fame of a preaching progenitor, but I do have a legacy of four generations of preaching that I have had to lovingly and hopefully thoughtfully adapt from and move away from to be effective in my own time.  Here is what I have tried to do:

A Conversational Tone:  In the old days, the tone of preaching tended to be top-down, drony, authoritative, "preachy", glib, detached, sanctimonious, and a bit pithy.  This list of adjectives sounds like I am picking on the more traditional style.  Far from it.  In the old days, preachers had to convey the idea that they were the actual oracle of God each weekend.  This was partly due to the context of a world which was literally falling apart (WW II, Economic Depression, Korea, Vietnam, Civil Rights).  Preachers of old would practice their hand gestures in the mirror, making sure they were cupping there hands in exactly the right way.  The tone I have tried to develop is more conversational.  It is hopefully conveying less the sense that, "that preacher guy is perfect!," and conveying more of a sense that, "Well, that guy seems like he is on the journey as I am.  He is imperfect, fallen and doing his best."

A Self-Affacing Style:  In the old days, a congregation wanted to hear how very near to God their pastor was.  The hope was that even though they themselves knew they were far from perfect, that if they hung around a pastor who was better than them, that some of their theological shimmer and perfection might rub off.  So, on Sundays from the pulpit, pastors were accustomed to give their resumes - how many books they have written, what seminaries they attended, what important people they were chumming with, what grades they got in elementary school, how God had spoken to them that very morning, who was in their small group.  This tendency has totally gone in the opposite direction.  People attending church today want to know that their pastor is human, fallen, normal, approachable, just like them...

More Experiential:  As much as younger listeners and worshippers hate to admit it, as much as they want to convey the idea that they are entirely rational and logical in their cause driven efforts, ultimately they are all "suckers for experience."  If you are under 40 in this country (and I can say this cause I am just now 40), you have grown up with color TV's all your life, computers that talk to you, cell phones that have movies on them, theme parks that offer presentations in 4D (sight, sound, depth, and experience), not just 3D (how boring).  And it isn't just young listeners.  My grandma in her 90's watches Fox News every night.  Grandma likes Fox News not for their "Fair and Balanced" coverage per say, but for their sensational graphics and attractive anchor people.  It's the experience that is persuasive even more than the conveyance of news.  Modern church goers expect the same thing, and modern preaching must adapt.

I would love to keep writing this post, but the portable camera baby unit on the desk in front of me is showing me that my 5 month old downstairs needs some attention....