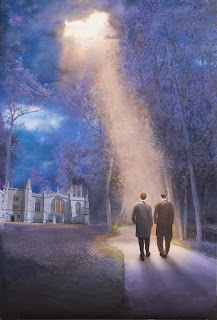 I just finished my paper on C.S. Lewis for my DMin class for Fuller Theological Seminary and Oxford University.  Actually, I am quite proud of the thing.  It's entitled; "Real Things: C.S. Lewis As A Paradigmatic Exemplar of A Faith Journey."  I know that sounds like a mouth full, but what the paper is about is really how Lewis came to faith.  The paper is about how God chose Lewis long before Lewis chose God.  The paper is essentially about how Lewis initially discovered God through his vocation (what he did) rather than because of some perfect intellectual argument for God (what he believed).  The paper boils down to this.

It was a Saturday night.  The claret had been flowing all night long.  Dyson and Tolkein were talking with Lewis about faith.  At one point, the conversation turned to story telling and story writing (myth).  All three men loved writing myths and stories ("The Hobbit", "The Lord of the Rings"... are only a few examples).  Tolkein then said to Lewis; "You know Jack, God is the great myth maker (story teller).  When we write stories, we tap into God's essential being, in some mysterious way."  Just then a breeze blew through the trees on Addison's Walk, at Magdalene College, and the rest, as they say, is history.  The wheels began turning in Lewis' heart and soul about how God had made him, C.S. Lewis, a unique and special being, to write stories about God, that were, in essence, truer than factual accounts of God.  Four days later, Lewis accepted Christ as his personal savior.  Again, the primary argument of the paper is, vocation (what we do for God) actually precedes belief (what we think of God).

Vocation was a precursor to many of the apostle's faiths as well.  When Jesus saw Peter and Andrew, James and John out fishing, the compelling factor in following Jesus was not an intellectual argument that "Jesus is God."  No, the disciples were not really ready for that.  What they most needed was something to do.  Jesus called them to "follow me, and I will make you fishers of men."

In my own faith and call journey, I did not become a pastor because of some deep theological argument.  Actually, at the time that I decided to go into the ministry, in many ways, my faith was not all that deep.  But then, I was offered a job at Wasatch Academy in Mount Pleasant, Utah.  I taught New Testament to sophomores, Old Testament to juniors, World Religions to seniors and Ethics to freshmen (Ethics to freshmen in high school has always been a contradiction in terms for me...).  Nevertheless, I loved it.  I couldn't wait to do more teaching.  I went to seminary because I found out what God wanted me to do (vocation), more than because of any deep heart change or lofty intellectual arrival.

The concept of understanding vocation (from the Latin word Vocatio - to call) before a person makes an actual decision to follow Christ has groundbreaking implications for the way we share faith with people.  For years, the most effective way of sharing faith, and getting people to believe in Christ, has been to have huge rallies at football stadiums or public arenas.  Great evangelists like Billy Graham and Joel Ostein share the gospel to thousands, as the talk moves closer and closer to a decision for God, the tone of the evening becomes more somber.  Then, at a dramatic moment in the evening, the question is asked, "Do you accept Jesus as your savior?"  The speaker then says, "This would be a good time to do that."  Music is played.  People come forward.  Now, don't get me wrong.  There is nothing wrong with this approach.  I went to a Billy Graham Crusade in 1979 in Boise, Idaho, and I will never forget it.  The point is that this type of decision at a rally approach doesn't work for everyone.

For very many people, it is the connection between what they do (vocation) and how God uniquely made them, combined with what God wants them to do going forward (a calling), that makes the biggest difference.  As Lewis said, "God closed in on me, I was in fact offered what now appears a moment of wholly free choice.  But I feel my decision was not so important.  I was the object rather than the subject in this affair.  I was decided upon.  I was glad afterwards at the way it came out, but at the moment what I heard was God saying, ‘Put down your gun and we’ll talk.’”

Actually, what God might have said was, put down your gun...and let's write!