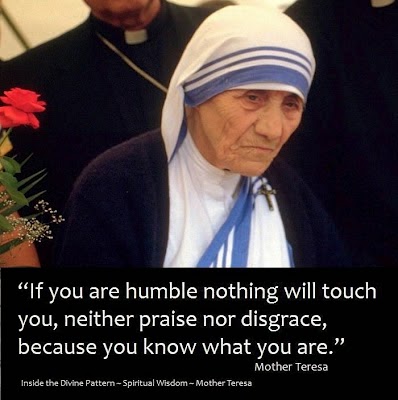 The pre-eminent psychotherapist Carl Jung used to love to tell a story about a rabbi who was asked one day, "Why did God show himself to people so often in ancient times, but today, no one ever sees God?"  The rabbi responded, "Because, in modern times, no one can bow low enough to see God." The phrase, "bowing low enough" can be summed up by one word in our modern lexicon:

One of the most important aspects of God's ability to act, to move, to bring about fruit in our lives is the disposition of:

Again and again, the Bible offers examples and stories of people who were only able to be healed, receive salvation, turn the corner after they knelt before God,  lowered themselves, repented, asked forgiveness, or were brought from high places to low places.  The list is endless:

*  Adam and Eve trying to be like God, but falling from grace, had to bow before God
*  The rich young ruler had to humble himself with his financial resources before God
*  Moses had to take off his shoes while walking on holy ground
*  David, through his own poor decision making process with Bathsheeba, repented, and bowed
*  Jesus' greatest sermon: "The meek shall inherit the earth", is about bowing our hearts
*  John the Baptists' greatest sermon: "Repent for the Kingdom of Heaven is Near", is about humility

One might argue that the entire Bible, perhaps all of human existence hinges on the human heart's ability to enact:

But you already know this.  My big thought for the week is that humility is not a quality that we can actually have any personal control over.  True humility occurs when we outside forces or actions cause us to have to reverse direction.  In short, we can't WILL true humility.  We can't wake up in the morning and say, "Today, I am going to be the most humble person in the world. I am going to receive a gold medal in humility."   I am more and more convinced that humility only occurs through the hard things that happen to us in life, and our larger ability to give those tough experiences to God.

C. S. Lewis once said that, "A man is never so proud as when he is striking an attitude of humility" (Christian Reflections, p. 14).  What Lewis was capturing is the sense that we cannot impose, or impute humility in our own lives.  We must be made humble by the tough experiences of our lives.  Later Lewis said, "Pain is the megaphone by which God rouses a deaf world."  He might also have added that pain and tough experiences are the way that God allows humility to begin to grow in a person's life.

In my own life I have had many things, though compared with others not so many, that have helped me to become more humble:

There are many other experiences which I would like to write, but which are either too raw or I am still processing which have helped me to become more humble.  These experiences I would never have desired to undergo, nor would I ever want to go through them again.  But I am thankful that one of God's favorite tools for bringing about fruit in this world, is when a human heart comes before God and says, "I'm sorry."  Then, change can begin.