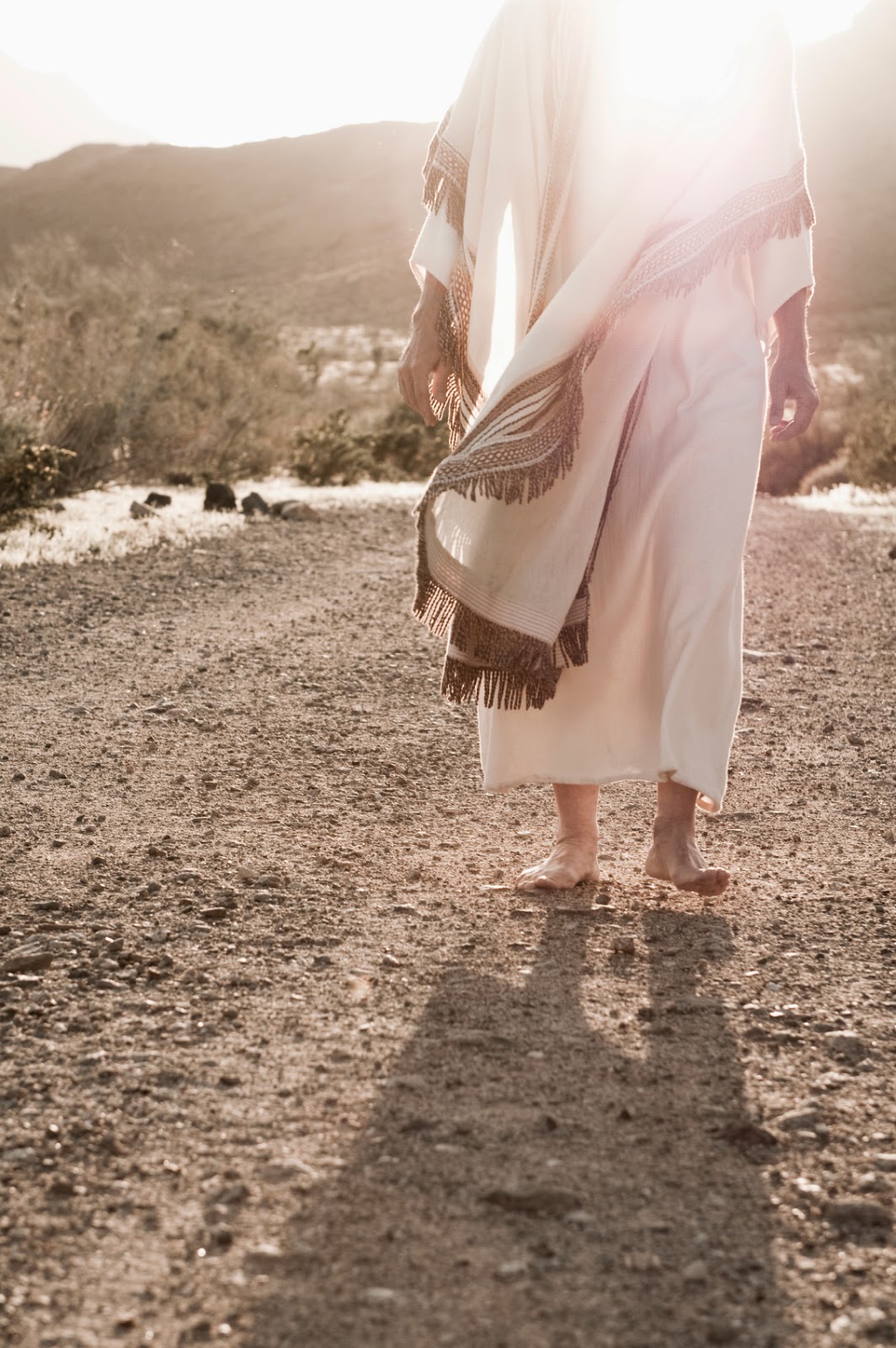 I recently made an interesting discovery as I was reading my Bible.  From the book of Genesis to the book of Revelation there are many, many accounts and descriptions of Jesus/God going on;

Before I make my larger point, let me give you some examples.

*  In the book of Genesis, just after Adam and Eve ate the proverbial fruit of the tree it says, "Then the man and his wife heard the sound of the Lord God as he was WALKING in the garden." (Gen. 3:8)

*  When Jesus was beginning his ministry in Galilee and recruiting his first disciples, the Bible says, "As Jesus WALKED beside the Sea of Galilee, he saw Simon and his brother Andrew." (Mark 1:16)

*  One of Jesus' most famous miracles is when He WALKED on the water; "About the fourth watch of the night he went out to them, WALKING on the lake.  He was about to pass them, but then they saw him WALKING on the lake, they thought he was a ghost." (Mark 6:48-49).

*  One of the first sightings of Jesus after he is resurrected is when he is on a WALK on the road to Emmaus; "As the two men talked and discussed these things with each other, Jesus himself came up and WALKED along with them." (Luke 24:15).

And there are many, many other texts in the Bible depicting Jesus/God on;

Maybe you can think of more examples.

What is the significance of this?  Well, on it's face there is, of course a practical dimension to walking in the ancient Middle East.  Walking was one of the only means of transportation.  If you were going to get from point "A" to point "B", and you were poor, as the disciples and many early people were, you would walk.

However, I think there is a deeper, more spiritual thing going on when Jesus walks.  I have always felt that when Jesus was on a walk, he was listening for God's voice, he was praying, he was contemplating larger things.  Perhaps it was in the combination of physical motion, and Godly thinking that inspiration came to Jesus.  There is a dignity in Jesus' walk.  Even in the face of great adversity and evil Jesus walked.  Jesus WALKED to the cross.

We might ask ourselves, why aren't there any descriptions in the Bible of God running?  When Peter and John find out from the women in the garden that the tomb that held Jesus only a few nights before was empty, the Bible tells us that there was a veritable running race between Peter and John to get to the cemetery; "So Peter and the other disciple started for the tomb.  Both were RUNNING, but the other disciple outran Peter and reached the tomb first." (John 20:3-4).  There are no descriptions in the Bible of Jesus running.  Even when Jesus' friend Lazarus died, Jesus does not run to save him.  Though the Bible does not say, one gets the feeling that Jesus simply sauntered his way to meet his friend who was dead.

Walking is a deliberative, paced, metered, thoughtful, discerning mode of movement.  There is a slow, foot after foot, step after step dynamic to walking.  After a run, a person can feel winded, and tired.  A run requires a short burst of energy.  A walk requires an ongoing expending of energy.  C.S. Lewis was famous for his long walks through the countryside, or in-between his house at The Kilns and Oxford.  Lewis would often say that the walks were a way of stimulating his mind, and his body.  There was a spiritual dimension to Lewis' walks.  The actor John Travolta once said on actors theater that the most important thing to learn in acting was not what you say, but how you walk.

I used to compete in Oratory at a national level, and I remember that my coaches would always tell me that my walk up to the front of the stage was as important as the first words that I said.  A speech tournament can be won through a good confident walk and it can lost, even before you utter your first word, through a sheepish, scuffling or scared walk.

Each morning when I wake up and think about this great effort that we are on to start a new church, I say to myself, "Just remember, Graham, that all great things of God are a WALK, they are not a running race or a sprint.  Just WALK through this day, and then WALK through the next day, and the day after that, and Jesus will be walking with you."

And he will WALK with you as well!