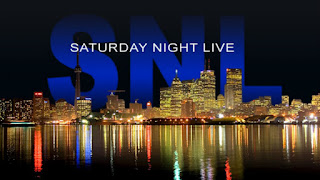 This year, Saturday Night Live celebrates it's 40th anniversary.  For forty years, almost as many years as I have been alive (I am 43), SNL has brought live comedy sketches to late Saturday night television screens around the country.  The list of comedy luminaries and creative geniuses to emerge from SNL through the years are too numerous to count: John Belushi, Dan Aykroyd, Chevy Chase, Gilda Radner, Eddie Murphy, Billy Crystal, Martin Short, Jon Lovitz, Dennis Miller, Phil Hartman, Mike Myers, Adam Sandler, Chris Farley, Amy Poehler, Chris Rock, Julia Lous-Dreyfus, Darrell Hammond, and Will Farrell are just a short list of those who have come from the show.  Literally almost anyone who has every been anyone in comedy in the United States has been on SNL.

What is amazing to me about SNL is that they produce such a fantastic show every single week, week in and week out.  Sketches that we can still remember and laugh at many years later (Motivational Speaker, Weekend Report, Church Lady...) comedic classics, were thrown together in less than a week.  How did this happen?  How were they able to corral the talents of so many people into a crystalized show so often for so many years?

This past week, I heard an interview with the Executive Producer of SNL - Lorne Michaels.  He was asked how they got ready each week.  He said that it definitely was not easy.  That corralling so many talented people to produce creative material is a huge challenge.  Part of the goal is to be less creative and not more.  He said, "I often see my job as the killer of creativity at SNL".  The challenge is not to come up with new ideas, but to focus on the ones that you have.  As a new church developer, I can relate with this.  In a more traditional church my goal was to get new ideas forming (which is almost impossible).  In a new church development, my goal is to stop so many new ideas from forming and focus on the ones we have.

It was a comment that Michaels made about the production of the show that has remained with me, however.  Michaels said, "Each week we say, we are going to 'air' not because we are ready, but because...

Very often a sketch will not be completely ready, or a set of lines will not be totally memorized, or a particular routine won't really be working, but that show still needs to go on the air.  You go with what you have got each week, not what you wish you had.

I can relate to this notion in preaching as well.  Each week, I sit down with my staff and talk about preaching concepts on Tuesday.  Then, I write an email "Mission Blast" to the entire database which hones in on a key concept or idea for the message.  Then, I write the message on Thursday (usually 4 hours of focus and writing).  Then I let it ferment for a day.  Then, I spend another hour writing on Saturday, and practice the message.  Practicing is really a way of figuring out whether a particular idea will work rhetorically.  Often a concept will work on paper, that does not work rhetorically.  Then, I offer the message on Sunday  morning.

I can relate with Lorne Michaels' sentiment.  Each week, I go to the congregation with a message, not because it's ready, but because...

What I love about this sentiment is also the freedom that this gives a person's soul.  It's not really up to you, as a preacher, or a worship leader, to determine or mandate the direction of a particular message, song, or offering.  All you can do is offer it up, and see what happens.  And in this way, a large measure of Holy Spirit is also involved in worship and preaching.  You do your best, you work as hard as you can, then you give it to God.