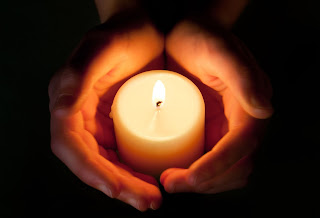 I am taking a class for my Doctorate in Ministry on the subject of Contemplative Prayer.  You might think that being a pastor I have mastered all aspects of prayer and have a rich "interior life" (as I have learned that prayer aficionados call it).  Nothing could be further from the truth.  Like CS Lewis, I consider myself a total beginner in prayer and a completely inadequate practitioner of it.  However, one idea has helped me get past the starting blocks in my prayer life.  Maybe it will help you too.  It is the idea that:

Having grown up in a fairly rigidly traditional style of Presbyterian worship, I have become used to long encomium-like prayers where the words, carefully chosen over several hours of preparation, are the coin of the realm.  Complex words, released from the prayer's basket, like flowers strewn down an isle at a wedding, are how you pray.  An example of this would be Dr. Lloyd Ogilvie's prayer at Mark Labberton's inauguration as president of Fuller, a year or so ago; "Dear Lord, whose prevenient power upholds us..."  It was a beautiful prayer, but...I can't do that!?!?

But this kind of prayer is not what Jesus had in mind, or many of the early, ardent Christians.

For the Desert Father's (people who prayed constantly in the 3rd and 4th centuries) the exact words which were spoken were less important than the posture of the heart.  And so many of them began to use centering prayer techniques, repeating key phrases again and again and again; "Lord Jesus (inhale) Have Mercy (exhale)", "Lead Me (inhale) Holy Lord (exhale)", "Come Lord Jesus (inhale), Be My Guest (exhale)".

I have personally found the regular prayer of the late pope John Paul II to be helpful; "Totus (inhale), Tuus (exhale) - literally "My Lord - My God".  The double "t" sound off of the tongue helps me to push away the world as I center on God.  Plus Latin just sounds cooler than English!

Several years ago, I visited the home of a family who had just lost their 26 year old son to a sudden heart attack.  The son had collapsed on the floor of the kitchen in the very home where I was now standing.  The presence of death still hung heavily in the summer air.  I had no words to offer.  The parents had no words to speak.  And so, the father, began to pray without words.  "Ba Ba Ba Ba Ba Ba Ba".  With tears rolling down his cheeks, he repeated again and again, "Ba Ba Ba Ba Ba Ba Ba Ba".  The father didn't need words.  God knew the pain that he was feeling.  In times of painful prayer;

This morning as I was loading my 3 year old daughter into the car, to take her to gymnastics, she had a bit of a tantrum.  After the initial tears of anger, Sheena fell into a kind of rhythmic time of what I would call "tears of release".  Imagine again and again in the same tone, the same rhythm, "waaaaa, waaaaa, waaaa."  I decided to give it a try myself.  I joined her in her crying, "waaaa, waaaa, waaaa". The same rhythm, the same tone.  Sheena started to laugh.  I started to laugh.  We both felt better.

Here's my best advice for prayer