For France The Bell Tolls 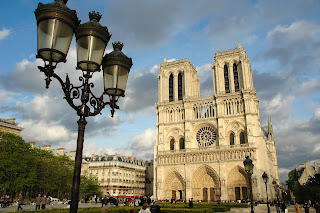 In April of 2005, as pink flower blossoms were budding on the cherry trees of the Tuileries gardens on the east side of the Seine river, Star and I were enjoying a morning croissant and a cappuccino in a road side diner in Paris.  There is no city like Paris!  We had decided to splurge and celebrate our 5 year wedding anniversary in Paris.  Because we had no kids, or dogs, we had more disposable income and freedom to travel, and so were able to make the trip.   And - there is no city like Paris!  We also splurged by getting a hotel room only a stone's throw from Notre Dame Cathedral.  While we were there, an historical occurrence took place.  Pope John Paul II died.  With the announcement of the news came the deep and sonorous peeling of the bells of Notre Dame Cathedral.    The cathedral seemed, all at once, to come alive, after centuries of dusty sleep.  A steady, and resonant "bong" rung out from the old Gothic towers of "Our Lady's" church.  With the peeling of the bells also came the streaming of people, many of whom had long abandoned the Catholic faith, to the ancient church.  There was a tragic energy in Paris that evening, which is basically impossible to comprehend unless you are witnessing it first hand .  The entire city was moved by the loss.

This past Sunday, the bells of Notre Dame Cathedral rung out once again.  This time, not for an octogenarian pope who died of natural causes - but for 129 ordinary Parisians who were gunned down in the bloom of their youth.  They were gunned down while reading papers in cafes, listening to a concert, watching a soccer game, and strolling the be-cobbled streets of Paris.  One of the most shocking news facts which have emerged this Monday morning is that many (if most) of the people killed were under the age of 30 - students, artists, young business people, techies, and hipsters.

As an American, and a pastor, I am afraid I don't have any deep truths to offer my blog readers after this tragedy, except, like you, I am alarmed by the increasing strength and resolve of ISIS to move beyond it's own borders to perpetrate such an act, and afraid of what the future may portend for all of us in terms of heightened security, and greater general paranoia.  And, like you, my heart grieves for our friends in France.

Oh, there is one other thing...

I am worried about the backlash against Muslim immigrants who are streaming into Europe and the United States.  This past Sunday, I told a true story in my morning message (which will be posted later this week on our church website and on Facebook) of a Muslim man and his family who, in 2003 fled the oppressive theocracy of Iran.  He found himself in Afghanistan not long thereafter only to be beaten down once again by an 7.45 richter earthquake.  Still in flight for his life and livelihood, he made it to the shores of Greece, where he and his family found themselves in the city of Athens.  This man (who now goes by "M" because he is still afraid for his life), encountered Christianity for the first time in his life in Athens.  The Orthodox churches with crosses on the tops of all of them were a comfort to him.  "M" learned about the Christian faith and decided to be baptized.  On the morning of his baptism, a Muslim relative found out about the plan and boiled a pot of water and poured it over "M's" head.  With scars all over his body, "M" then crawled to the Christian church, and crawled to the altar where he said, "No matter what they do to me, I will love Jesus."

So, in the end, it isn't just France for whom the bells toll...

It is all of us, who must live in a world that is much less safe, and much less sound.

But we can emulate our friend "M" who, upon his baptism, said;  - "No matter what they do to us, we will love Jesus"