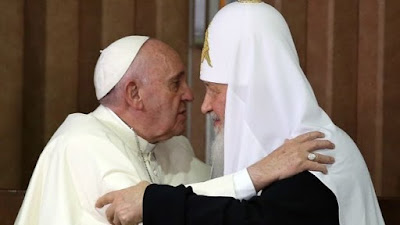 This past week, an historic connection and the beginnings of a momentous "reconciliation" began when pope Francis, pontiff and head of the Roman Catholic Church, met in person with Patriarch Kirill, head of the Russian Orthodox Church.  The meeting took place in Havana, Cuba, of all places, at a side room in the airport.  Wouldn't you have loved to have been a porter in the corner at that meeting?  The connection lasted a little over two hours, and thus began the end of a feud and a rift that began around 1,500 years ago.  Yes, you have it correct, it has been an almost 1,500 year row (1,569 to be exact) between the Catholic Church and the Orthodox Church.  This seemingly interminable amount of time between the cause of the conflict and beginning of reconciliation is the main focus of my blogpost this morning:

In case you forgot what the original disagreement was between the Catholic Church and the Orthodox Church (the same way that many people forget that the original cause of the family feud between the Hatfields and the McCoys was a stolen pig), here is a quick rundown:

*  In 447, Pope Leo I, wrote a very mean letter to bishops in Sicily (a group credited with early seeds of Orthodoxy), rebuking them for doing baptisms on Epiphany rather than Easter.  This was a petty complaint.

*  In 782, Emperor Charlemagne accused the "Greeks" of deleting the Filioque from the original Nicene Creed.

*  In 809, Pope Leo III forbids addition of the Filioque (reversing a previous decision by the church) to the Creed.

And the rest, as they say, is history...

These early disagreements have led to mostly frigid relations between the Catholic Church and the Orthodox Church for this millennia and a half.  Yes, once again 1,500+ years.

Then, out of the blue, and propelled by a deep sense of desire to right the wrongs of previous popes and mend many different broken places in the world, Pope Francis offered a proverbial olive branch to the sitting Patriarch of Moscow, head of the largest Orthodox denomination in the world.  And the two leaders began the process of reconciliation between the two churches.

Forgiveness is a gift from God.  It is something that we participate in with the help of the Holy Spirit.  And on this first full week of Lent, it is good to remember that forgiveness is what Jesus offered all of us from the cross; "Father, forgive them, for they do not know what they are doing," (Luke 23:34).

Perhaps, it must be said, for many of us, though forgiveness can take time, it won't take us as long as it has the world's two oldest Christian churches...1,500+ years.

But as they say, better late than never:-)