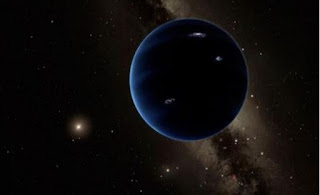 Sometimes you wake up in the morning and you discover that everything has remained the same from the day before: the same sun, the same moon, the same routines, the same old stuff.  Other times you wake up and the world/universe is completely different.  Recently, because of the research of scientists at the California Institute of Technology, it would appear that things in the universe have, "changed, changed utterly" (in the words of the poet William Butler Yeats).  Scientists have discovered a:

Yes, you have it correct.  Remember that model of the solar system that your sixth grade teacher had on his desk where the sun was at the center of the model and rotating axises of round balls could be moved around the sun to indicate different planet formations?  Remember where Mercury was at the center and tiny Pluto was at the edge?  Throw it away, it's obsolete.

There is a new planet in town.  It turns out that it is actually 10 times the size of the earth.  It is so large and it's orbit is so elongated that it takes around 10,000 to 20,000 years to orbit the sun.  But scientists are pretty sure that it is there - The Ninth Planet - dangling out on the edge of the solar system, like a giant bowling ball about to roll off of a table.

But why does it really matter?  Why am I writing about this at all in this Monday Blog post?  Why should we care?

It's just incredible to me that something so large and with such gravitas (indeed gravity) should be right under our solar system noses and that we just discovered it.  I had a therapist friend who once told me that, "none of us can see under our own hoop skirts".  In this case though, it is that no one on the planet earth can see under our own planetary horizons.

The interesting thing is that one of the reasons why we haven't discovered this planet until recently is because it is simply too big.  In the words of researcher, Mike Brown, "It's simply huge.  We can't see it but we know it by it's gravitational pull."

It begs the question of what other huge things there are out there that we are unaware of.  Are there fish lurking in our oceans that we are unaware of?  My Scottish superstitious mind goes to the Loch Ness Monster.  Is the world really round?  Is the sun really at the center of the solar system?  Maybe there's a bigger sun out there somewhere that is really our sun.  Again, in the words of Mike Brown, "There's a pretty substantial chunk of our solar system that's still out there to be found, which is pretty exciting."

Shakespeare once wrote, "There are more things in heaven and earth, Horatio, than are dreamt of in your philosophy" (Hamlet).

For Christians we have the option of seeing the discoveries of the world as something to be either feared or welcomed.  The history of Christianity is rife with both examples and extremes.  When Galileo made the great proclamation that the earth was not, in fact, the center of the universe, but that the sun was the center, he was exiled to a remote island in the Mediterranean.

The Ninth Planet has not been named yet.  Perhaps, since Pluto was kicked out of the solar system a few years ago, we could name it Pluto Two.

Or call it...HORATIO...the Shakespeare character from the play Hamlet, whose own mind was boggled, like our own, about the vastness of God's universe and the depth of it's expanse.