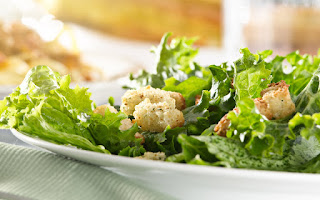 It is no exaggeration to say that I have probably made around 1,000 salads in the past two years.  The truth is, the way that some people work on the "Great American Novel", I am working on the "Great American Salad".  I have been working to perfect the best salad on the face of the earth.  I love a really good salad, and because they are healthy and light I love to eat them.  Being filled up with salad does not make you feel sluggish the way being filled up with a steak dinner can.  The process some evenings can take me up to two hours to perfect the perfect salad.  Here are some of some of the tricks I have learned on the road to salad perfection:

Homemade Croutons
These are best made by taking dryish bread (preferably sourdough), and tossing large chunks of it in olive oil, garlic, basil, seasoning, some kind of hard cheese (Parmesan, Aged Gouda...).  Then, bake it at 350 for 20 minutes.  Salt and pepper to taste.

Finely Diced Ingredients
I don't know where I learned that the smaller the ingredient, the more of it you can get into your mouth.  Lots of small bits of lettuce, pickled beets, cucumbers, carrots and bacon, taste better in your mouth than large chunks of just one thing.  In high end restaurants this has become known as "chop salad".  Salt and pepper to taste.

Washing All Ingredients Thoroughly
This would seem to go without saying, but lettuce, and other vegetables just taste a lot better if they have been washed totally and thoroughly.  They are also, not to mention, much more healthy this way....

Plating Salad Nicely On A Glass Plate
My mother gave me some rather inexpensive clear glass plates several years ago, and they are my favorite for plating salad.

And so my evenings have gone.  One salad after another.  One collection of vegetables, type of lettuce, temperature of ingredient (there is nothing better than really cold lettuce, sometimes I put mine in the freezer until just before serving), and variety of cheese.  The one thing that has eluded me, though, in my quest for salad greatness has been the salad dressing.  And, of course, the salad dressing hands down one of the most important factors in making a great salad.

Typically, I have begun each salad dressing by taking an empty salad bowl and just randomly throwing in some kind of oil, vinegar or lemon juice, salt and pepper, Dijon, and any other sundry ingredient.  But the dressings have never been quite right.  Sometimes they are too light, other times they are too acidic.  Sometimes there is too much dressing other times there is too little.  Too vinegary, too salty, too peppery, too spicy...too strong!  But then I discovered an incredible thing, which is actually the main (and slightly belabored) focus on my blog post this morning.  I discovered a...

After about two years of making salads from scratch and spending long hours on them, trying to concoct the perfect salad totally on my own, I decided to try something bold and out of the box.  I decided to try and consult a recipe for making a dressing.  And so, as a child of my technical generation, I went to my I-Phone and Googled, "How to make a great Balsamic Salad Dressing":

Presto, the perfect dressing!  After two years of trying it completely on my own, what I discovered is the power of consulting a source that is more knowledgable than me (imagine that).  What I learned  is the benefit of getting the input of chefs and experts (many of whom likely gained Micheline Stars by making salads), chefs and experts who have made even more salads than I have.  What I uncovered is the power of a:

I was thinking that many people live their lives by the same method that I have made my salads.   They try to figure them out (to make their own salads), all by themselves.  Some people spend much more time than two years and 1,000 tries in living their own codes, ideas, concepts, and precepts.  Many people spend an entire lifetime trying things out on their own.  Like me, often people say, "I know I can figure it out on my own.  Just give me a few more tries."  But like me, many people find that though their own "way" is often pretty good, it is never exactly just right.  In my own case, it is definitely a degree of ego - I will figure it out by myself - that has prevented me from true excellence in the kitchen.

But there is, of course, an ultimate recipe book from our lives.  It is not the "Joy of Cooking" but it is the Bible.  The Bible is the story of God's intervention, direction, nurture and guidance of millions of people throughout the history of the world over thousands of years living.  As the book of Proverbs says, "Every word of God is flawless; he is a shield to those who take refuge in him." (Proverbs 30:5).

If you are in need of an answer today, or have been trying to live life by figuring out things totally on your own, check out God's Recipe Book - the Bible.  And then, feel free to...."salt and pepper to taste".