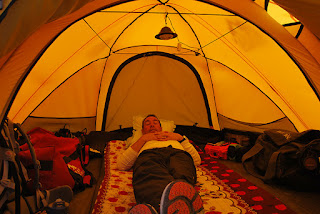 My aunt Sheena, who lives in England - and who also happens to be a World War II concentration camp survivor - frequently talks about moments in our lives which are periods of collecting energy.  These are not necessarily always understandable or decipherable moments, but they are vitally important for the harboring internal reserve and power.  Without them, we could not do what we are being prepared to do.  She calls these periods -  moments of;

One of my favorite genres of writing are climbing novels and biographies of adventurers.  The best of these, from an American literary standpoint is, Into Thin Air by John Krakauer.   The book is about the fatal climbing accident that occurred on Everest in 1996 and that claimed the lives of several of his best climbing friends.  The book is about climbing, but really, it is about the human quest for greatness and summiting all kinds of things (our fears, our goals, our hopes, our dreams).  Krakauer talks about how summiting Everest is not really about simply shear strength and "daring-do", but it is also about waiting.  It is about waiting for the right moment to push for the summit.  It is about waiting for the clouds and the storms to part long enough for climbers and adventurers to make a big "push".  It is about simply lying in their tent and doing absolutely nothing [picture above of climber waiting at the base camp of Everest].  Krakauer talks about how days upon days were spent at the base camp, just sitting in their tent and reading.  And Krakauer is not alone in this.  Every climber ever to reach the peak of Everest has done the same.  In Krakauer's words; "While tent bound on Everest, Mallory and his companions would read aloud to one another from Hamlet and King Lear."  But really, what they were doing is;

I have a friend, named Dustin Stevens, who is an extreme athlete.  He has run countless marathons.  He has run the vaunted Iron Man triathlon in Hawaii several times.  He is currently training, amidst all of his other life actives, for the famous Birkebeiner cross-country ski race in Wisconsin - the gold cup of cross country ski races in America.  Dustin tells me that athletes have a name for this notion of gathering strength.  It is called - "tapering".  Tapering, in Dustin's observation is the act of, "building your strength over a long period of time - but pairing back your training right before a big race, in order that when you are entering that race (in swimming, or running, per say), you have that, 'extra amount of strength' and endurance to compete really well."  Tapering is another way of talking about;

And so, I have been thinking about what gathering spiritual strength might mean.  What would it mean for God to offer a person a period of downtime or a lull in their life during a certain point, in order to prepare them (to gather strength, to taper) for the next leg of life?  What would it look like for a person to be able to go inwards (spiritually, physically and emotionally) in order to gather strength for what comes next?

There are many moments in Jesus' life when he seems to be intentionally pulling himself away from the group, or the crowds or the action in order to gather strength for the next big hurdle.  Right after John the Baptist is killed (Jesus cousin and friend in ministry), Jesus withdraws to a remote region of the Sea of Galilee (the Gerasenes), to pray and be by himself.  There are frequent examples of Jesus, "slipping into the crowd" in his ministry.  Where was he going, what was he doing?  What about the 30 years of Jesus' life that were lived before his ministry began that we know virtually nothing about.  Was Jesus gathering strength?  And what about the last three years of his ministry which burned bright and hot.   But even in these, Jesus drew himself away again and again.  The best example is when Jesus goes to the garden of Gethsemane the night before his crucifixion to pray and to prepare and to;

What time period are you in right now?  Are you in the midst of a metaphorical push to the summit of Everest, or are you in a time of gathering strength?  The summits of life will always be there.  But before they are attempted, because we are human, we must, all of us, draw inward.  Even the best of us only has a certain amount of energy.  So first we must be;