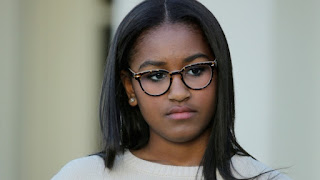 On this Martin Luther King Jr. weekend, and on this, the last week of Barak Obama's Presidency, I wanted to take a moment to reflect on perhaps a lesser figure on the global political stage, but a person that all of us can learn an important lesson from.  I want to focus on Barak and Michelle Obama's younger daughter - Sasha.  Sasha Obama (15), and Malia Obama (18) are often cited by her father, the soon to be former acting President Barak Obama, as the two most important achievements of his life. However, at his final, valedictory speech to the nation this past Tuesday night, Sasha, the younger daughter, was nowhere to be seen.   "Where was she?" many people wondered.  The rumor mill around Washington was active.  Was she on a secret spy mission somewhere?  No.  Did she misbehave and was she grounded at home in the Whitehouse?  No.  The answer, as it turns out, was much more mundane than all of that - Sasha was at home doing her homework!

As a father of two budding young female world leaders myself (my two daughters Haley 8, and Sheena 4), both of whom have reams of homework themselves every night, I instantly knew that Sasha's explanation for her absence from her father's speech was correct.  Sasha had an exam the next morning, and was studying to make sure that she did as well as possible the next day.  It turns out that CNN actually did some background research on the story and found a link on Sasha's school's schedule and found that a science exam was in fact being held on Wednesday the next morning (Wait...there's no secret log-in to get onto the school's test schedule so that outsiders like CNN can't snoop into the private lives of ordinary American citizens?  I digress).  Rather than attending her father's goodbye speech, a speech she had no doubt heard countless times before in a myriad of different forms - Sasha was doing her homework.  Well done Sasha!

So, this morning I want to lift up Sasha Obama in my blogpost, and everyone, for that matter, over the next four years of civic life in America who will, for one brief moment, turn off their TV clicker, put down their I-Phone, stop checking Facebook, cease putting pictures on Instagram, and dare I say stop tweeting messages to the general public - and who sits down to do their homework.  I even have a name for it - I am calling it:

Recently, comedian Judd Apatow sat down with New York Times reporter Maureen Dowd to articulate the same idea; "There's a danger," he said, "on the internet that you think you are accomplishing something.  So you see an article about a disease and retweet it and think 'It's cured now!' and you've fooled yourself into thinking that you've done something productive."

Lest you think I am getting preachy with this blogpost, I want you to know that I am really writing it to myself.  Perhaps more than anyone I know, I can tune into news every evening and be captivated by every news story that emerges, and feel that by watching it, I am somehow participating in the larger American narrative.  Every morning, I commute for one hour up to Santa Barbara from where I live in Oxnard.  A friend recently said to me, "What are you doing with all of that time in the car?  Are you using it wisely?  You could learn a language on tape, or listen to audio books."  Another friend actually gave me tapes on how to learn modern Greek in three simple months.  Am I listening to them?  No.  The answer is that I would rather follow the recent news stories of whatever is breaking or emerging from the ever more scintillating and scathing news-cycle that occurs every minute in this country, than do my homework.

So that's it. On this MLK day weekend, that's my blog.  Do your homework!  Whatever that homework is.

Thanks to a 15 year old high school sophomore for teaching us all this lesson!