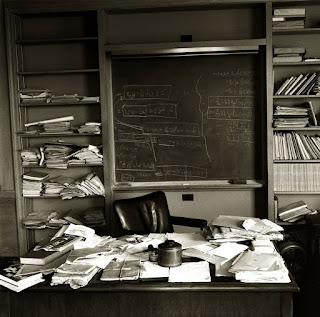 This past week I discovered a fascinating thing I did not know about the great physicist, Albert Einstein.  It is this.  Einstein worked, quite literally from the day he was born, until the day (literally the last hour before he died).  The photograph above is a shot of Einstein's desk, taken quite literally an hour or two after he died in 1955.  As you can see, his desk was totally cluttered, and math equations were still scribbled on the chalk board behind his desk.  Reports are that Einstein's pipe was still warm on his desk when his picture was taken.  Just before this picture was taken, he was rushed off to Princeton Hospital, where he died not long thereafter.

And what was Einstein working on right up until the end of his life?  For the final thirty years of his life, Einstein had been working on a Unified Field Theory - in short, a singular mathematical equation which summed up all of the universe.  Many years before he had discovered the theory of relativity.  Now, for the remainder of his life, he worked on the Unified Field Theory.  Other scientists laughed at Einstein, and some still do, about the potential and possibility of such a theory even existing.  But Einstein kept working on it.  For thirty years.  Obviously, Einstein would pass from this earth without the completion of his main life goal.

When I heard about Einstein's last hours of life, it reminded me of Moses' last hours of life.  For a nearly similar amount of time (40 years and not 30), Moses had been working on his own life's goal and ambition.  Moses had been working on the liberation of the Jewish people from slavery in Egypt and their eventual deliverance into the promised land.  The liberation of the Israelites and their delivery into the promised land was quite literally Moses' - Unified Field Theory.  And yet, he, like Einstein, would never complete his life's work.

Hours before the possibility of entering the promised land, God told Moses, on the top of Mount Nebo;"I have let you see it with your eyes, but I will not let you cross over into it" (Deut. 34:4).  Moses would not complete his life's work.  Moses would die, as the preacher would say, on his walking stick, overlooking the Promised Land in his 120th year of life.

The parallel endings of Einstein's and Moses' lives raises the important question of what the definition of a good life really is.  Is the definition of a successful life that we will accomplish all of our personal goals?  Is the ultimate fruition of our ambitions and our dreams really a good metric for the overall grade of a good life?  I would suggest not.  Our goal as people, as Christians, is not to complete our goals, but, with God, to continue to go after them.  It is the leaning towards what we seek after that is more important than the ultimate completion of what we attempt.

And God thought Moses had accomplished a great deal even though his dream of entering the promised land would never come about.  Consider what the book of Deuteronomy says of Moses; "No prophet has risen in Israel like Moses, whom the Lord knew face to face, who did all those signs and wonders the Lord sent him to do in Egypt - to Pharaoh and to all his officials and to his whole land.  For no one has ever shown the mighty power or performed the awesome deeds that Moses did in the sight of all Israel" (Deut. 34:10-12).

What main goal has God put you on on the earth in order to attempt to accomplish?  What is it that you are uniquely wired and designed to do for God and the world?  Keep going at that goal - your own version of the Unified Field Theory - the Promised Land.  The solving of the theory, the entrance into the Promised Land should not be the metric of the success of your life.  But the attempt at both should.