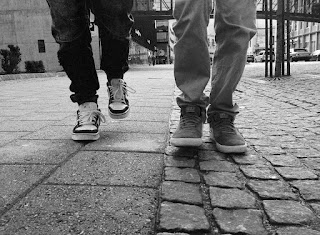 For the past six months I have been working on a personal project of spiritual growth and theological understanding.  It has been on a personal sojourn to try an unlock some of the secrets of how we are made as human beings, the exact nature of God's relationship with us, some of the problems with what is going on in our American political context right now.  More broadly, what I am interested in, is what is critically wrong with Christianity as we know it in the North American context today.  And so, I have been writing a book.

The book is entitled, "With: The Transformative Power of Going With People Rather Than Against Them".  Over the next 19 weeks, I will be writing blog posts that will flesh-out aspects of this book.  I want to invite you into the conversation.  I want to get your help in writing this book.  If anything I write over the next several weeks strikes a chord with you in any way, please let me know.  If you, like me, are as interested in unlocking the secrets of God's relationship with us, then perhaps we can embark on this journey together.  What I am after is nothing short of, as Hemingway once said; "writing something true".  And so now, if you are still WITH me...here is installment #2:

This book is about a powerful, singular and central concept.  It is about the transformative power of going with other people.  That’s it!  Going…with…people.  If you already have a facility for this life skill, or are good at it, then feel free to put this book down right now.  It will be a waste of your time to read it.  But if you are like me, and for whatever reason, are pretty capable at doing a whole lot of other things, but have never been really very good at going with other people, then this book is for you.

And, I must admit, that it has been quite a surprising self-revelation to me that I am not good at going with people, because, as I said, I have shown an aptitude at several other things in life.  I am pretty-good at being a pastor.  I am a reasonably good father.  I am a fairly adept leader.  I like strategic planning and visioning.  I have been told I have some gifts in public speaking.   Cooking.  I like to sing!  I play the bagpipes and the piano and the guitar.  I can do all three (though, not usually at the same time).  But going with other people….that elusive and ineffable life skill which seems to require a gear that I have not been given…appears, somehow, and mysteriously to be lacking in me all these years.

Now, I want to be clear.  It is not that I don’t care about people.  I do.  A lot!  I know that I have a certain level of “empathy” in my character swath because a recently taken skills and personality test has shown me that.  But it is the intentional act of going with other people – the art of listening and not giving advice, the coming alongside and not acting superior towards others, the practice of taking information deeply into my soul and not just nodding and smiling that I lack.  It’s just - going with that is somehow hard for me.

The Problem - I’m Not The Only One

What I have surprisingly discovered, through the writing of this book, is that I am not the only one who is lacking in this fundamental human skill set.  An increasingly large number of people in our world are, it would seem, also lacking and increasingly devoid of the ability to go with others.

Consider the following examples of how isolated, separated and alone our modern American landscape has become as it finds an almost total inability to go with one another.

·      *  Most people don’t have friends or even contacts who are in different political parties from them, have different religious affiliations, or are a part of different cultural backgrounds.  Most people do not go with people who are not like them politically.

·      *  Most fathers spend less than an hour a day with their children - and a total of only seven hours a week with their kids.  Most dads, in other words, do not go with their own kids

·     *   Half of the entire population of the of United States do not know the name of their own their next-door neighbors.  We do not go with those we are living in close-proximity with.

·       *  60% of Non-Christians in North America do not know anybody in their world, or their social set, who is a practicing Christian”.  Most non-Christians have chosen not to go with people of the Christian faith.

·      *  Less than half of all people who self-identify as heterosexual in North America have friendships with people who are gay.  Most straight people do not go with gay people, though the opposite trend (of gay people going with straight people), is not the case.

·      *  While men tend to be worse in terms of having close friendships, most people today say they have less close friends than ever before.  We, as a society, are choosing to go it alone!

In short, it would seem that more and more people in the United States are going against than they are going with.  More people are going in opposite directions, than they are coming together.  To paraphrase one of the great social commentary books about the American landscape in the previous century, The Closing of the American Mind, by Allan Bloom, “We are like lonely shepherds living on a site where great civilizations once flourished.”

And, in the place of continual and ongoing relationship and even what might be considered as the most basic and “minimal association” with one another there is an increasing sense of separation.  There is separation from one another and there is separation from ourselves.  Within this separation there is, as the late twentieth century theologian Paul Tillich, once said, a level of (to use a Christian word for it), sin: “sin is separation”.   We are separated from God, separated from one another, and separated from ourselves.  So, isolated have we become from one another, that in the place of common and civil dialogue there is often heated conflict and protest.  In the more modern words of the famous conflict negotiations expert Bill Ury, author of, Getting To Yes; “conflict in our country seems to be at an all-time high.  We are at the most intense time ever.  We are not at the most dangerous time in history, that was during the Cold War, but we are definitely at the most intense time in history.”  At the same time that our personal relationships in America seem to be getting more and more bifurcated, our national relationships and political conversations are becoming increasingly separated.