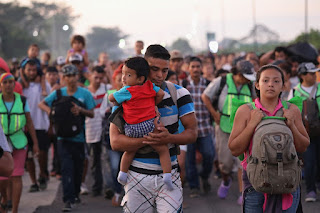 Let me share with you one of my favorite Biblical texts: "Leaving Succoth, they camped in Etham at the edge of the wilderness.  The Lord guided them by a pillar of cloud during the daytime, and by a pillar of fire at night.  So they could travel either by day or night.  The clouds and fire were never out of sight" (Exodus 13:20-22).  This is the account of when the Israelites first left Egypt, in about the year 1,500BC, and fled pharaoh (a brutal and awful dictator), to hopefully make it to the Promised Land.  What is so amazing about this text, is that even now, thousands of years later, you can still feel the deep fear and pain that the Jewish people faced as they left Egypt.  Would they make it to the Promised Land?  Would they die in the desert?  How long would the journey take?  Would they be welcomed when they reached the Jordan River, or would they be turned away?

Now, let me share with you a news clip from last week's news about a caravan of Guatemalan and Honduran refugees who are currently fleeing an equally despotic and evil regime: "A caravan of Central American migrants marching into Mexico bound for the United States grew to at least 5,000 people Sunday despite threats by the United States to seal the border.  The throng, many from Honduras, streamed across a bridge over the Sachiate River connecting Guatemala with Mexico" (USA Today, Oct. 22, 2018).  Similar to the story of the refugees who left Egypt 3,500 years ago, the modern day Exodus of immigrants tells an equally harrowing tale.  These are people who have nothing left to lose.  They have nothing else to live for, except the possibility of finding freedom in Mexico or the United States.  The same questions apply.  Will these people make it to the Promised Land?  Will they die in the desert?  How long will the journey take?  Will they be welcomed when they reach the Rio Grande, or will they be turned away?

As an undergraduate I studied Political Science at Macalester College in St. Paul, Minnesota.  What I learned from my undergraduate degree is that political problems are always more complex than the pat and simple answers that politicians often give.  There are times for "Realpolitik" (tough solutions), and there are times for "Amnesty" (more gracious solutions).  That said, if I was President of the United States I don't really know what I would do to help with this problem.  My gut tells me I would follow the advice of modern day political adviser David Gergen, and former adviser to 5 Presidents, and give Honduras and Guatemala each a billion dollars in aide, help to move along the dictatorships in those countries, and help the Mexican government to build a kind of wall along the southern border of Mexico.  But again, I am not President.

What I do know is that as Christians, whenever we read the Bible, we should look around us for modern day examples of the accounts we read about.  So, when we see a homeless person by the side of the road asking for money, we should be reminded of the time when Peter met the man outside the temple and prayed with him, "silver or gold I do no have, but what I do have I give you.  In the name of Jesus Christ of Nazareth, walk" (Acts 3:6).  When we see a single mother in a supermarket, holding a baby in one hand, and a basket cart in another, we should offer to give her some help, buy her a bottle of water at least.  When Jesus encountered a woman like this by a well, he struck up a conversation and he gave her hope, "Woman, you are not far from the kingdom of God" (John 4:25-26).  And I know that when we see a modern day of oppressed people, who have nowhere else to turn, we should hear an echo from the distant past about our own people, our own lineage of faith, who fled a similarly desperate set of circumstances.  And we should remember how the Exodus ended for the Israelites - in freedom: "Then all the people crossed at a spot where the river was close to the city of Jericho, and the priests who were carrying the Ark stood on dry ground in the middle of the Jordan and waited as all the people passed by" (Joshua 4:16-17).