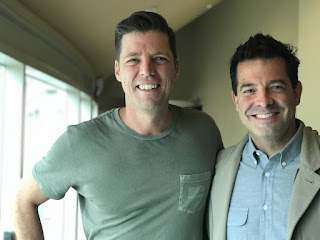 It is no surprise to anyone who has known my ministry for any amount of time, that I am a big fan of the Schuller family.

If you don't know who the Schullers are, I apologize, the next blog post will be for you:-).

In high school, when I was just sixteen years old, I will never forget taking out my Walkman cassette radio (bear with me if you are a millennial), and place in that Walkman a cassette of Robert Schuller Sr.'s powerful talk on the "Power of Possibility Thinking".  On a snowy winter evening in Salt Lake City, Utah, I listened to a riveting talk by Dr. Schuller about how the, "greatest churches in the history of the world haven't even been founded yet."  On that wintery evening in December, I decided that THAT is what I wanted to do with my life (even though I definitely didn't ever want to be a pastor).

Later, in college, I visited a conference on preaching by Robert Schuller, and met Schuller and told him that I wanted to go into politics in my life.  He said to me, "Graham, I wanted to go into politics too, but I decided to become a pastor instead.  Be a pastor like me, you will never 'term out' as a pastor (the way that a congressman gets term limited out)."  Even though it would be many years after that that I would become a pastor, my conversation with Dr. Schuller went deep.

When my brother, Jamie, and I started Highlands Church, in Paso Robles, many of our main big ideas came from Robert Schuller.  We met in a movie theater in downtown Paso Robles.  We did out of the box things like have a huge beacon at night on Christmas Eve, attracting local party goers to our Christmas Eve service.  Our founding elder in that church, Nancy Richardson, grew up in the Crystal Cathedral, and her father (Wilterink) was a founding elder at Schuller's church in Garden Grove.

Today, I met, Robert Schuller's grandson - Bobby Schuller - who can be seen regularly on Trinity Broadcast Network (TBN) with the "Hour of Power".  And - get this - Bobby Schuller, and his church are joining the Presbyterian Church (USA), the same denomination that I am a part of.  In Bobby's own words; "We think the Presbyterian Church USA actually has a good name brand.  People outside the church actually look up to the PCUSA, and want their kids to grow up in churches connected to the PCUSA.  We, at 'Irvine Pres' are not an open and affirming congregation on same gender issues, but we want to be in conversation with people who hold different opinions on that topic.  We are excited about the future of our congregation in the PSCUSA."

During the course of my one hour meeting, I found Bobby to be extremely thoughtful and kind and engaging.  Even though he comes from a long line of pastoral greats, he doesn't seem to be overburdened by the weight of history, or the expectations that he must feel upon his shoulders.  There is an unabashed optimism about Bobby that is contagious.  He is excited about what the future of the church is for people who are committed to justice issues and who offer vital ministry options for needy people who come to visit local congregations.  Bobby feels that the future of the church is not with denominations, but with local congregations.

I for one am excited about our new friendship with one another.  As I met with Bobby today in Irvine, CA, I sensed that the Holy Spirit was a part of our conversation, and that God was doing something bigger than just a meeting between two pastors.  I sensed that in an ineffable but real way, God was bringing together two young men, whose families have served in the ministry in significant ways, to bring them together to do something great for God.