Pastoring and "The Old Vic" 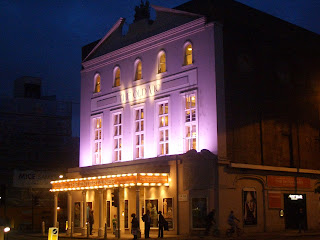 Many of my blog readers are young pastors who ask me advice about how to be a pastor.  So, this blogpost is for them.  Sorry, if you are not a pastor, but perhaps there may be something for you in this post as well...

I often get asked what being a pastor of a large church is like.  No other professional enterprise quite compares to being a pastor of a large church, but I sometimes say, "being a pastor of a large church is like being the General Manager of 'The Old Vic' in London."  Then they ask me, "What's the Old Vic?"  "The Old Vic," is one of Europe's most storied theaters.  It was founded in 1818, and has had many of the biggest names in acting and theater and drama attached to it.  Sir Lawrence Olivier often played (acted) at the Vic.  Douglas Fairbanks also played there.  But here's the interesting twist.  Where most theater companies have a separate director and General Manager from the main lead actor, "The Old Vic" doesn't.  At "The Old Vic," the same person that acts in many of the shows also directs the shows, manages the theater, produces the shows (develops the money for them), and does advertising to the public for the shows.  Throw in general maintenance of the theater itself (custodial, refurbishment, expansion, safety measures), and you get an idea of how much the lead person does.

Most recently, Kevin Spacey, the actor, has been the General Manager of, "The Old Vic" (his official title was the 'new artistic director' but he basically runs the place).  Kevin would act as a main actor in the lead role, Kevin would run the board of directors, Kevin would hire the other actors in the theater, Kevin would make sure the patrons were taken care of, Kevin would talk to big investors about financing shows, Kevin would keep the name and reputation up of, "The Old Vic."  And theater isn't what it used to be.  Back in the day, going to a show at a theater was the best form of entertainment on the weekends.  Today, people are more likely to go out to a movie in a cinema, or better yet, stay at home and watch a video on Netflix.  So, there is an evangelism component to being the GM of the Old Vic as well.  Kevin spent most of his time actually convincing people that theater is/was a valuable medium, a worthwhile enterprise, a good use of time.  Most recently, the great Shakespearean actor Kenneth Brannach has been approached about the position of "new artistic director"( General Manager) of "The Vic."  If he takes the job, Kenneth will have an equally large responsibility and evangelical outreach component to his job.

Now...of course being the Head of Staff of a large church is very different than running a theater.  In a theater there are no bedside calls from patrons who are dying, there are no ministry discipleship efforts, there are no programs throughout the week, there is no outreach to the poor, there is no interface with other theaters, there is no need or desire to remain Orthodox in a particular approach, there is no mixing of many multiple voices and theological perspectives, there is no real desire to change the world or have eternally consequential conversations with clients (although perhaps there should be!).  There is no desire to serve God, and ultimately if God is served then none of the rest of it matters a whit.  Theater is very different from church in many, many important ways.

The most important difference, to coin an idea from the philosopher Soren Kierkegaard, is that worship/church should have God as the congregation as the main actors, the choir and the pastor as the conductors, and God as the audience (I think I have that right...).  And church isn't a show!

But sometimes, my budding pastors in the making, church is (I am afraid to say) like theater.  I know it isn't particularly "missional" or even "christianal" to say.  But it just is.  And to coin the thoughts of another great theater manager/director/writer, from another era - William Shakespeare:

"All the world's a stage,
And all the men and women merely players:
They have their exits and their entrances"; ("As You Like It")