The Power Of Admitting a Mistake 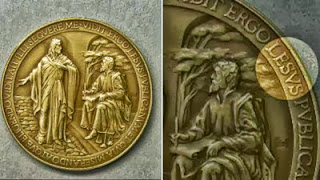 By now, most of the major news channels have moved on from the headline story a week or so ago about the mis-spelling of God's name by the Vatican, on 6,000 commemorative coins printed for the celebration of pope Francis' ministry.  If you didn't catch the story, here are the basics.  "The Italian institute that mints coins, passports and postage stamps mis-spelled the name of Jesus on 6,000 coins, instead calling the savior of the world - Lesus."

The mistake has prompted a whole tide of slightly blasphemous, but a little bit funny, jokes about how the new name of God might be applied to our modern day church music and hymnody.  Consider the following names of songs and hymns as alternatives;

But what I think was missed in the often times self-satisfied coverage by the media of this major printing debacle, was how deftly and smartly the Vatican responded to this crisis.  They didn't try to cover up the mistake.  They didn't attempt to shove it under the rug (though, 6,000 coins under a rug is very probably hard to hide).  They didn't sound defensive or reactive.  "Everybody mades mistakes," said the Rev. Federico Lombardi, "Even people who make coins."  And in being utterly transparent and mia culpa-ish (dare I say - Lesa culpa-ish), the Vatican was able to turn a major mistake into a life lesson, and a chance to model humility and non-perfection.

All of us, especially church leaders, should learn from the Vatican here.  For a denomination that has been steeped in alleged cover-up for so long, of childhood sex scandals involving priests, not to mention other coverups, this is a very refreshing new direction for the entire world to observe.  Pope Francis could not have engineered a lesson on "admitting mistakes" from the pulpit in a more effective way than was demonstrated by the admission of the misprinting on the coins.

On a more personal level, I can say that admitting a mistake as a pastor is one of the most effective things I can do to model Christian behavior and practice.  Often, in the middle of a message, if I make a verbal blunder or a mis-statement, and I say, "Gosh good one Graham," the whole room lights up with laughter and a more healthy sense of lightness.  It's as if they are all collectively thinking, "Hey, he's just like me...he's not perfect."  Of course, larger mistakes need to be admitted to as well, when they occur.  And in a similar fashion, public contrition and better understanding almost always ensue.

Pope Francis seems to be setting a pace for leadership in which he would appear to be able to do no wrong.  However, it is because he has admitted to doing something small and wrong, that he is able to be such a great leader.

We should do the same!