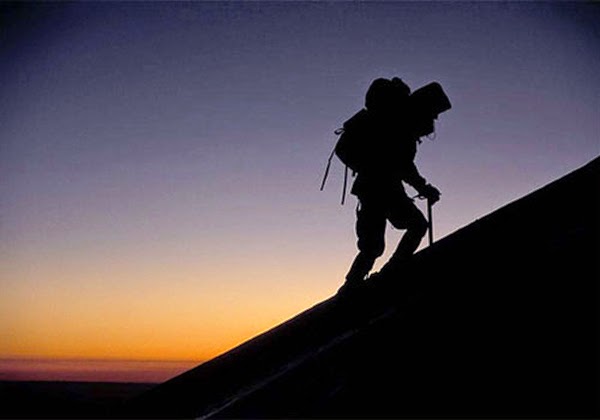 One time when I told him that I was afraid of heights - that I had the tendency to feel a little dizzy and scared (I suffered from vertigo) when I stood at the top of a very high mountain, or a very tall building, he had great advice.  Ranald said; "The difference between not feeling scared when standing on top of very high places (buildings, mountains) and feeling scared, is whether or not you have climbed them yourself or not.  If you climb a mountain yourself, you will never feel scared when you get to the top of it.  If you climb the stairs of a very high building, you will not feel dizzy on top.  If, on the other hand, you take a helicopter ride to the top of a mountain, or you take an elevator to the top of a building, you will often feel frightened of the height at the top."

This advice, on it's face, may seem crazy.  But try it, I have found it to be true.

When I was in college, I had a summer job at an oil refinery.  One of my very dangerous tasks that summer was to climb the ladder of a very tall smoke stack (like 500 feet tall), and to reach out at the top and paint orange protective paint on the pipes that suspended high above the earth.  Given that I have always been afraid of heights, I was petrified of this task.  But once again, Ranald's advice proved to be true.  When I climbed the stack, rung by rung on the ladder, and got to the top, I was less afraid than if I had been dropped on the top of the stack by a crane.

In both cases, what I think Ranald was alluding to was the basic notion that when humans invest themselves deeply in the ascent of high places, they somehow know intuitively how to get to the top, and how to get to the bottom.

Uncle Ranald's advice has proven true not just for mountain climbing or building scaling, and smoke stack scrambling, but also for life in general.  I have always been a little suspicious of people who rise in life to quickly.  Politicians, business leaders, executives, even pastors who go from the ground floor, if you will, to the top too quickly can often find themselves in a perilous place of leadership.  Not having had the arduous task of putting one step in front of the other to get to the top, leaves the leader actually not appreciating the amount of work and effort it took to build the business or political empire.

Former Congressman John Dingle of Michigan once offered a few thoughts about our current President - Barack Obama (don't worry, this is not a political blogpost, but let me offer this illustration to make a larger point).  He said, Obama just rose too quickly too soon in his political life.  Having served only 2 years in the Senate, before he ran for President, he didn't ever really learn the difficult and intricate process of governing.  Had he waited a few more years to run, and to learn (to climb, if you will, the mountain of politics, rather than be dropped on the top so quickly) he would have been a much more effective President.

Yesterday morning was our second Sunday for Mission Street.  It was a wonderful worship service!  Really special.  People were so fed by the worship music, prayers, message, etc.  Our attendance was 60 (which, by the way is 20 more than I was hoping for).  As the leaders were assisting with worship, we were all aware of the climb we were all making in starting a new church.  It's one step after the other.  It's one bend in the road, and view point after the other.  It's a beautiful journey.  And because we are climbing the mountain ourselves, we won't find that we are dizzy, or afraid of the view, when the summit is reached.